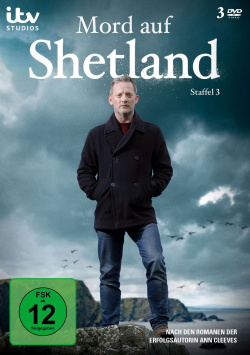 content: Quiet island life, my ass: For Detective Inspector Jimmy Perez (Douglas Henshall) and his team, once again an explosive investigation is on the agenda: When Thomas Malone, sentenced to life imprisonment for the murder of Lizzie Kilmuir, is released after 23 years, Perez fears that there could be problems. After all, hardly anyone believes in Malone's innocence - especially not when the young journalist Sally McColl (Amy Lennox) disappears during a folk festival and is found murdered shortly afterwards. The murder of Sally, the daughter of the former chief investigator in the case of Lizzie Kilmuir, shows clear parallels to the murder for which Malone was in prison. Of course, he is now once again under suspicion, but Perez does not believe that the case is as clear-cut as it seems. And indeed, a new lead will soon be opening up that will lead all the way to Norway. But Perez doesn't suspect yet that he will also be very personally involved in the case.

Season 3 of the series "Murder on Shetland" tells a story in six episodes, as in the previous season, which remains exciting and thrilling from the beginning to the end just because of the numerous twists and turns, but also because of the short change of plot from the Scottish Shetland Islands to Norway. Because the case becomes very personal for Perez, the whole thing gets an additional explosiveness, which makes even some small lengths quickly forgotten. Especially in this aspect the makers succeed very well in not making the whole thing look too constructed. Rather, the plot is comprehensible and very stirring, which gives this season a high emotionality in some moments.

Once again it becomes clear that "Murder on Shetland" is one of the pearls of the international crime scene. How here a classic murder case is being expanded more and more and leads the investigators into the right-wing extremist scene in Norway is simply very well elaborated. Add to this the good actors - above all Douglas Henshall - and the atmospheric pictures and you have a more than worth seeing portion of exquisite crime thriller enjoyment. Certainly, the wheel is not being reinvented here. And here and there the series also gets a little bit into the cliché trap. But this doesn't harm the high quality of the production in the slightest.

It's difficult to praise (or criticize) certain aspects of the season without revealing too much about the plot and some well placed surprises. Therefore, at this point only this much can be said: If you liked the first seasons of "Murder on Shetland", if you put more emphasis on atmosphere and well-drawn characters than on fast-paced action and if you generally appreciate high-carat crime fiction, which can be a little bit darker, you will get your money's worth. A very good season, which you shouldn't miss!

picture + sound: In the picture and sound quality of the series hardly anything has changed compared to the previous seasons. Due to the atmospheric colouring and a decent overall sharpness, an all around positive overall impression is created. The sound is rather reserved, whereby the powerfully mixed dialogues are always supported by well used ambient noises. All in all, the audio-visual realization is on a good TV level!

Extras: Unfortunately, the DVD set doesn't have any bonus material to offer.</The new season of "Murder on Shetland" tells an extremely exciting story, which becomes very personal for Jimmy Perez in several ways. This fact and the extension of the events to Norway underline once again that the series is one of the biggest crime highlights of the current series landscape. An exciting story, great actors and a very engaging visual language provide about six hours of best entertainment! On the DVD, "Murder on Shetland" again presents itself in good picture and sound quality, but there is no bonus material for this season either. Nevertheless this box is again: Absolutely recommendable! </p>