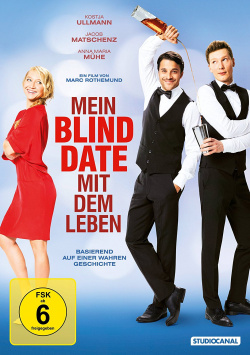 My Blind Date with Life - DVD

Film: Saliya Kahawatte (Kostja Ullmann) was a normal student until the day he couldn't read his notes during a lecture. The reason for this is an irreparable detachment from the net house, which leaves the boy with only five percent of his vision. Almost blindly, Saliya can actually forget his dream of training as a hotel specialist. But he doesn't realize that he should just give up now. He applies anyway - and receives one rejection after the other. But that doesn't discourage him either. And so he simply applies to the Bayerischer Hof in Munich without mentioning his handicap. With his sister, he exercises to hide his blindness and thus manages to get a training place. But can the hard everyday life in a hotel really be managed without sight?

"My Blind Date with Life" is based on the incredible but true story of Saliya Kahawatte, who lost 95% of his eyesight as a teenager and who, after some severe setbacks, accepted it not as a handicap but as a challenge. As the first severely visually impaired person, he studied management and made a career in top hotels. In the meantime he has become a successful business coach and motivation trainer who has touched many people with his life story. Kahawatte was also involved in the film adaptation. He introduced leading actor Kostja Ullmann to his working method in a luxury hotel in Hamburg so that Ullmann's game would appear as authentic as possible.

Director Marc Rothemund ("Sophie Scholl") and the two authors Oliver Ziegenbald ("Frau Müller muss weg") and Ruth Toma ("Emmas Glück") have conjured up a wonderful feel-good cinema out of the true story, which only appears somewhat exaggerated in a few dramatic passages. But most aspects work really well. Especially the friendship between Saliya and his colleague Max (Jacob Matschenz) makes for some extremely funny, but also nice moments. The friendship seems absolutely real and as a viewer you have the feeling that you would like to have them as buddies yourself. Also the slowly blossoming romance to the young mother Laura (Anna Maria Mühe) is very stirring and pleasantly drawn cliché-free.

But even at times when you're on the beaten track, the whole thing is refreshingly fresh and entertaining. Rothemund has created the perfect mixture of humour and drama, of feeling and authenticity, which makes even small weaknesses quickly forgotten. The film is simply beautiful, amusing and moving. He gives joy and courage and also shows some really good acting performances. And the message of history could not be more beautiful: Don't ever stop believing in yourself and don't let yourself be persuaded that you shouldn't dream any further! That's what it's all about: Absolutely worth seeing!

Picture + sound: Warm colours and a good overall sharpness make the visual implementation of the film a complete success. This also applies to the sound, which is determined primarily by the dialogues and the music depending on the genre. The Dolby Digital 5.1 Mix also brings out the soundscape in the hotel or on the playground. Good.

Extras: The bonus offer starts with a very sympathetic and interesting audio commentary by Kostja Ullmann and the real Saliya Kahawatte, who talk about their first encounter, the preparation for certain scenes and the true background. Besides there is the really good ZDF documentary "Eyes closed and through" about Saliya Kahawatte (ca. 28:39 min.) and a short Making of (ca. 7:34 min.). In addition, there is the short documentary "Kostja trifft Sali" (approx. 5:28 min.), seven interviews with the actors, producers and director (approx. 29:20 min.), as well as a test shoot (approx. 1:26 min.). A premiere clip (approx. 3:20 min.), outtakes (approx. 3:03 min.), as well as further small outtakes as mountain film (approx. 1:50 min.) and conclusion film (approx. 1:50 min.) are contained together with the trailer likewise in the good bonus package.

Fazit: With over 700,000 viewers, "My Blind Date with Life" was a real surprise hit at the cinema. The beautiful, amusing and moving film convinces with good actors, successful humor and a lot of heart. The DVD convinces with a good picture and sound quality and also has a lot of good extras on board. absolutely recommended!