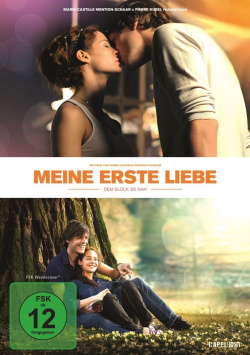 Film: Zachary Scar (Martin Cannavo) is a real rebel. He has already flown several times from expensive private schools to which his father, who was very wealthy, sent him. And also at the venerable boarding school Fresnaie he infuriates shortly after his arrival with his unadapted behaviour. Especially the ambitious Sarah (Esther Comar) is the new classmate a thorn in the side. Again and again the two of them clash. But once again the old wisdom is true: what teases, loves. After initial disputes, a romance develops between the two, which Zach, however, does not seem to take seriously at first. Only slowly Sarah manages to get through to the closed rebel. While he becomes more and more softened by them, their school performance suffers badly from the relationship - and that so shortly before graduating from high school. As soon as the two have found their happiness, tensions and quarrels arise again and again - and the first great love seems to be over before it has really been able to unfold...

With "My First Love" director Marie-Castille Mention-Schaar ("Welcome to Brittany") has staged a beautiful love drama for girls aged 15 and over that melts the hearts of the target audience with a beautiful visual language, likeable leading actors and a very emotional story. Especially in the moments in which Sarah and Zach drive each other mad with evil tricks, which then turns into tender romance, the movie works really well. There is a good chemistry between Martin Cannavo and Esther Comar, which sometimes makes the screen crackle quite a lot.

The dramaturgy itself is very cliched, which sometimes seems almost involuntarily funny. The young target group, however, will not be bothered much by this, as the conflict situations that are rousing for them only arise through these clichés. The nice soundtrack and the pretty pictures also comfort you about the missing originality of the story. What the movie really suffers from, though, is the director's attempt to give the story a little more depth through a particularly dramatic subplot that concerns Sarah's best friend Pauline. In a way, this is commendable, but the implementation is far too superficial to do justice to the claim. Pauline is struggling with a really serious problem, which she has to fight out more or less on her own, because Sarah's thoughts only revolve around Zach. The path that Pauline then takes is indeed consistent, but afterwards this strand of action more or less disappears into nothingness. Of course, this has something to do with the dramatic ending, but at the same time it also shows that this storyline is completely superfluous for the actual story.

The last act, which is already hinted at in Zach's voice-over commentary opening the film, can cause some tears in the eyes of the audience. Here Marie-Castille Mention-Schaar emotionally strikes the right note and compensates for a few bumpy moments. Of course, we don't want to tell you how the whole thing ends here. Just as a little tip: if you already have a hard time around your soul anyway, you might want to wait until your mood has improved again.

"My First Love" is a very pretty movie, despite many clichés. Girls who like movies like the last Nicholas Spark adaptations will certainly like it and will move it a lot. And more cannot be expected from a teenage romance. Worth seeing!

image + sound: The DVD image is dominated by very warm colors. The image sharpness is on a good level and only shows some small weaknesses in the dark moments. The sound present in Dolby Digital 5.1 is determined, as usual for this genre, by the dialogues and the film music. A few smaller sound effects like the humming of Zach's motorbike provide a little movement in the otherwise very centrally mixed action here and there. Good!

Extras: As a bonus the DVD has a worth seeing Making of to offer, which deals in almost 37 minutes in detail with different aspects of the shooting. This documentary is complemented by a good look at the creation of the film music in the legendary Abbey Road Studios (approx. 7 min.). The trailer to the film and further program tips of the offerer round this quite tidy additional offer off.

Fazit: "My first love" is a French teen romance, which consoles with good actors and beautiful pictures over some dramaturgical clichés away. For girls from the age of 16, who like it a bit more dramatic and sad, a worth seeing movie, which is complemented by a worth seeing Making of on the DVD. Recommended