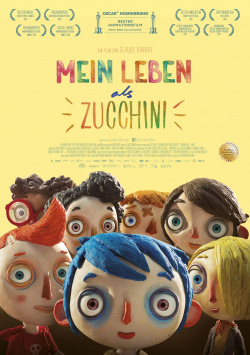 My life as a zucchini

After his alcoholic mother died in an accident, the nine-year-old zucchini comes to the children's home of Madame Papineau. Here he is not the only one who has already had a difficult childhood. This does not always make it easy to live together with the other children, such as the cheeky Simon, the quiet Béatrice or the dreamy Ahmed. But the children get together and manage to help each other in this difficult time. When Camille comes to them, Zucchini falls in love for the first time in his life. And he's actually happy - at least for a moment. Because Camille's beastly aunt wants to collect the care money and take the girl to herself. And that's what Zucchini and his new friends really want to prevent…          &gt.nbsp;                   href=">                 e e e  e  e  e  e  e  e  e  e  e  e &nbsp.nbsp;

"My Life as a Zucchini" is probably the most unusual animated film of recent years. And one of the best at the same time. It is not only the appearance of the figures, which are brought to life in the stop-motion process, that is unusual. They don't exactly look pretty, are completely overdrawn and almost look like caricatures. And yet they are the most authentic cartoon characters in a very long time. If the appearance of the figures at the beginning takes a little getting used to, one forgets that very quickly. This is because the story is also told in a very unusual way. She is surprisingly gloomy and of a honesty that is otherwise rarely found in children's films.

The team around director Claude Barras has succeeded in doing a real feat: although a lot of terrible topics like escaping from a war zone, abuse of children or alcoholism are addressed and the whole thing starts with Zucchini accidentally killing his mother, the whole thing is not a depressing fare. The film believes that its young viewers have compassion for the children, but they do not feel sorry for them and are emotionally overwhelmed by it. Rather, they learn what an important bond friendship can be and that even in dark hours there is always a glimmer of hope.

"My Life as a Zucchini" - quite rightly nominated for an Oscar - is in its dark way a wonderful film about children who are confronted with the dark side of life and yet pick up a piece of deserved happiness. A film that takes place beyond all clichés and despite difficult themes possesses a tremendous lightness and a lot of playful humour. In short: A little masterpiece! Absolutely worth seeing!

Kino Trailer zum Film "My life as a zucchini (Schweiz/Frankreich 2016)"
Loading the player ...