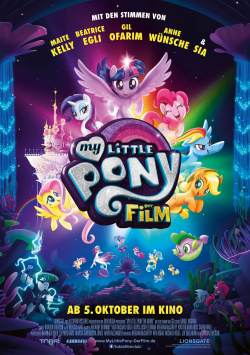 Lively activity in Equestria! Princess Twilight Sparkle (spoken by Julia Meyen) is in the middle of the preparations for the big friendship festival, for which even Songbird Serenade (sung by Sia) has announced herself. But before the big party can rise, there is a terrible attack: The dark storm king has sent Tempest Shadow (Maite Kelly) and their henchmen to Ponyville to rob the four princesses of the kingdom of their special powers. But Twilight Sparkle and her five best friends manage to escape. She knows it's up to her now to save the world from the Storm King. For this she needs the help of the legendary underwater kingdom Seaquestria. But how are Twilight and her friends supposed to find this place, especially since Tempest Shadow is always close on their heels?

With the colorful toy ponies of the series "My Little Pony", toy giant Hasbro filled a real gap in the market in 1983. Mainly girls liked the little critters so much that they even got their own cartoon series in 2010. And since this has now been running successfully for seven seasons, it was only a matter of time before there would also be a feature film. And now it's time: "My Little Pony - The Film" gallops into our cinemas.

The work is colorful, colorful and - maybe I already mentioned it - colorful. In addition, there is a somewhat shrill humour, lots of music and an adventurous story about friendship and a glittering, sparkling pony world. As an adult spectator you just sit shaking your head and seriously wonder what the makers smoked to come up with such ideas - and where to get this stuff to the broken off Tempest Shadow horn. But - and this is the main thing - the target group likes it. The film is tailored exactly to the needs of the fans. And since it is only made for them, one has to acknowledge - even if it hurts - that the mission of the makers has succeeded.

Although you have to say that maite Kelly may perform the song well in the credits, but is completely unsuitable as a dubbing artist, any further criticism is a lost love struggle, as the young fans are only concerned with one thing: Will I love the film if I like the series? And since the answer here is clearly "Yes", the bottom line is that there is a deserved one: Worth seeing!