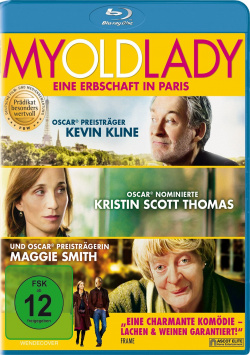 Film: Mathias Gold (Kevin Kline) from New York has never had good luck in his life. When he inherits an apartment in Paris from his late father, the tide seems to turn. With his last savings, the loner travels to Paris to turn his new property into money as quickly as possible. And he could really get a lot of that, since the apartment is worth a small fortune because of its location. But there is a catch: 92-year-old Mathilde (Maggie Smith) still lives in the apartment. Many years ago she agreed a so-called real estate pension with Mathias' father. This means that she is allowed to live in the apartment until her death and also receives a monthly pension of 2400 euros. Mathias, who is completely overburdened by the French real estate laws, would now actually have to pay her. But he doesn't even have the money for his return ticket. He is forced to share the apartment with the sprightly Englishwoman and her belligerent daughter Chloé (Kristin Scott Thomas), always hoping to get his hands on the legacy he had hoped for...

The award-winning playwright and scriptwriter Israel Horovitz makes his debut as a feature film director with the adaptation of his own play "My Old Lady". The theatrical origin of this mixture of comedy, drama and romance can be clearly seen in the film version. Although Horovitz enriches the story with a few picturesque recordings of Paris, in the end the whole thing seems more like a chamber play carried by his dialogues. This fact isn't necessarily to be judged negatively, but it gives some scenes a very artificial character to the actors' play and the dialogues, which takes some of the film's lightness away from it.

In addition, the mixture between comedy and drama only works to a limited extent. Especially in the first half hour, the production sprays with biting wit and amusing verbal battles between the lovably quirky characters. Here not only the tone, but also the tempo provides for really good mood. But then Horovitz changes both again and again, suddenly becomes very thoughtful and downright gloomy, drags some scenes unnecessarily into length, only to suddenly pick up speed again and strike up cheerful tones. In some places this works very well, but too often it seems a bit indecisive or even strangely out of place.

Luckily Horovitz can rely on his three terrific main actors. Maggie Smith only delivers another version of her "Downton Abbey"/"Best Exotic Marigold Hotel"-Character, but does it in such a wonderful way that you want to watch her for hours. When Smith, as a sly Mathilde, hands out her snippy tips, it's so amusing that you don't even bother for a second with the high recognition value of her figure. Kevin Kline is an absolutely ideal misanthropist. Especially in interaction with Kristin Scott Thomas, Kline is in top form. The play of three saves the movie from its weaker moments, too, which is why the overall impression at the end is quite positive.

"My Old Lady" is a very charming movie, that always manages to put a happy smile on the faces of its audience. Even if the somewhat unbalanced staging prevents the comedy from offering more than "just" good entertainment, the actors alone ensure that the bottom line is a satisfied "worth seeing"!

Picture + Sound: The audiovisual realization of the film is at a good level, whereby the sound in particular remains very reserved due to the genre. In some moments the DTS-HD MA 5.1 mix is pleasantly lively, but for long stretches the dialogues, the reserved soundtrack and general calm dominate the action. The image of the Blu-ray is absolutely clean and pleases with warm colors and a good overall sharpness, which also does not disappoint in the detail display. Good!

Extras: As a bonus the Blu-ray has beside the trailer only a short interview featurette with Kevin Kline (ca. 3:50 min.) to offer, which is not much more than a longer promo trailer.

Fazit: "My Old Lady" is a charming feel-good film that scores with beautiful shots of Paris and three wonderful leading actors. Even though the mixture of comedy and drama only works to a limited extent during the second half and there are some very tenacious moments, the movie still leaves a very positive impression and a smile on the faces of its audience. The Blu-ray presents the film in appealing picture and sound quality, while the bonus material is negligible. All in all this is enough for a decent one: Recommendable!