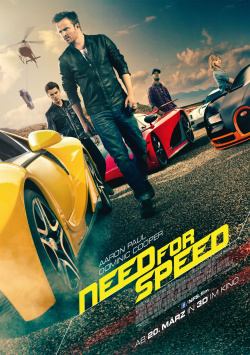 Tobey Marshall (Aaron Paul) is one of the best drivers of the underground road racing scene. Although the mechanic is an upright man in his heart, he uses the illegal races to bring urgently needed money to the coffers of the workshop he inherited from his father. But in the long run this will not be enough to pay off the immense debts. So the offer from Tobey's archrival Dino Brewster (Dominic Cooper) to pimp out a valuable Mustang Shelby for him is just right. Tobey and his team are doing a great job, but that's just the beginning of trouble. Because instead of paying, Dino challenges Tobey and his buddy Little Pete (Harrison Gilbertson) to a race that ends deadly for Little Pete. Although the guilt clearly hits Dino, he gets himself a false alibi and so Tobey has to go behind bars for the death of his friend. When he is released a few years later, he starts a rapid and ingenious revenge campaign against Dino, who quickly degenerates into a wild hunt across the USA…

Fast cars, cool boys and sexy girls - at first glance it looks as if "Need for Speed" is just another "Fast and Furious" clone. But despite some similarities, the action strip based on the successful EA™ video game series finally takes its own way out of the oversized shadow of the popular "Fast and Furious" franchise. With stunts that almost completely dispense with computer effects and rapid chases, "Need for Speed" has a lot of adrenaline and food for the eye to offer. Too stupid, though, that the very fast-paced staging is repeatedly slowed down by the only conditionally convincing dramaturgy.

Because the script is really not the great strength of the film. Although "Breaking Bad"-star Aaron Paul obviously tries to give his character something like depth and Imogen Poots manages to fill the character of the quick-witted Brit Julia Maddon with life and charm at times, the characters as a whole remain very one-dimensional and almost as flat as the dialogues that were put into their mouths. The whole thing is so full of clichés that even minor surprises remain the absolute exception.

To enjoy "Need for Speed", brain activity should therefore be reduced to a necessary minimum. Because it's only when you don't care about the plot drawn in stencils and the very simple dialogues that the whole thing is really fun. Director Scott Waugh and his team staged the race scenes in a great way. Waughns goal was to bow to action classics like "Bullitt" or "Vanishing Point San Francisco" and to stage the stunts in the tradition of these movies. Although there are of course also some quite absurd moments, in which the whole thing overshoots the mark a little bit, it did the movie a lot of good that the main focus was on practical effects. Whether across the city, on highways or on more impassable terrain, the numerous car chases and car stunts make this film an extremely entertaining pleasure despite its many dramaturgical weaknesses.

Even though the running time of more than two hours wouldn't have been necessary to tell the rather poor story, "Need for Speed" is never really boring. Scott Waughn has staged an intellectually deeper action cracker, which eventually fails at too many hurdles to become a true classic of its genre. For an entertaining visit to the cinema for all PS freaks and muscle car fans the whole thing is enough. Not quite as cool as "Fast and Furious" but still: Worth seeing!