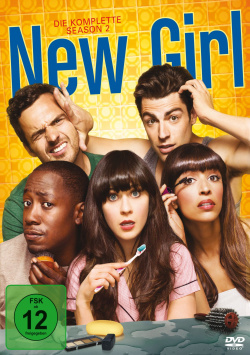 Contents: Shock for Jess (Zooey Deschanel): she loses her job as a primary school teacher who made her so happy. Jess falls into a deep hole where her flatmates Nick (Jake Johnson), Schmidt (Max Greenfield) and Winston (Lamorne Morris) would like to help her out. But unfortunately the three boys are not really suitable to give advice for an orderly life. And so Jess plunges into a meaningless affair with the doctor Sam (David Walton), who fortunately is just looking for some uncomplicated fun. Only Jess wouldn't be Jess if the whole thing didn't get extremely complicated quickly. In the meantime Schmidt has recovered from his penis fracture and now hopes to get back together with CeCe (Hannah Simone). Stupid only that she has a new friend (Nelson Franklin), who also seems to be a really nice guy.

Nick has completely different problems there. His zombie novel just doesn't go ahead, he gets a visit from his future self and a short relationship with the attractive Angie (Olivia Munn) also brings more chaos than happiness into his life. And then he suddenly starts to develop serious feelings for someone close to him. And he of all people, who is so reluctant to reveal his feelings. In all this chaos, Winston is still trying to keep some reason and calm - which is not so easy when he suddenly takes over Jess's PMS symptoms or when a cranberry lands in his ear at Christmas, which severely impairs his hearing. So it goes also further very turbulent to in this WG...

"New Girl" goes with much wit and heart into the second season. The fact that Jess loses their job, Schmidt and CeCe are no longer a couple and Nick is repeatedly brought out of his lethargy, be it by an alleged time traveler, his father, a new affair or, of course, by Jess, makes for a little movement in the otherwise still very well functioning basic concept of the series. "New Girl" lives from the charm of its dysfunctional characters and their interaction with each other. And here the makers have really made a difficult grade hike. They have given the characters so many obvious weaknesses that they are unlikely to be real sympathizers. And yet as a spectator you quickly take each and every one of this chaos troupe into your heart, first and foremost of course the loveably weird Jess.

Another strength of this comedy series is that it doesn't just focus on the big, simply knitted laughs, but fortunately also does without the typical sitcom laughter. No question about it, there are many amusing and also really funny scenes. But in between, the series also treats itself to more and more quiet moments, which however still get a turn before they can drift into the kitschy. The episode in which Nick's father dies is particularly striking. This episode already has a big melancholy on it, because actor Dennis Farina, who played Nick's father Walt, actually died only a short time after his last appearance in the series. And yet this episode does not seem overly sentimental. She's a little sad and very honest about Nick's character. But she is also humorous and life-affirming, which is also due to the sensitive and pointed production of director Jake Kasdan ("Bad Teacher").

Although the second season has a few little hooks and not every one of the twenty-five episodes works out quite well, "New Girl" is still one of the most likeable and funny comedy series in its second year. Even though the sometimes a little bit weird and crazy humor is not in the mass taste and "New Girl" will never attract comparable masses like "The Big Bang Theory", at least fans of more unconventional US comedies will get their money's worth. And for that there is a deserved one: Absolutely worth seeing!

Picture + Sound: Compared to the first season not much has changed here: The picture is very clean, the colours warm and powerful and also the overall sharpness is satisfactory. The Dolby Digital 5.1 Mix lets the amusing dialogues sound clear and powerful from the home cinema boxes, whereby the frontal area in particular is required. The English soundtrack sounds a little more harmonious overall. Good!

Extras: Unlike the first season, the second season has slightly less bonus material to offer. Thus Disc 1 is completely bonus-free and on the second DVD there is only one audio commentary on the episode "Der Cooler", recorded by the executive producers Elizabeth Meriwether, Brett Baer and Dave Finkel. The third disc offers a version of the episode "Jungfrauen" extended by about two minutes, about 6 minutes of missing scenes and some more amusing outtakes (about 6:27 min.). A Best-of Schmidt Clip (ca. 2:14 min.) completes the clearly arranged additional offer.

Fazit: "New Girl" kept the level loose after an extremely funny and lovable start in the second season. In the meantime, the actors have internalized their characters in such a way that this Chaos-WG is somehow authentic despite a certain exaggeration and especially because of its mistakes extremely sympathetic. The further development of the relationship between Jess and Nick and between CeCe and Schmidt adds an additional attraction that makes the 25 episodes of this season absolutely worth seeing. It is also praiseworthy that this season will not be released in two parts in Germany, as was the case with Season 1, but will be released directly as a complete box. But there is a clear one: Recommendable!