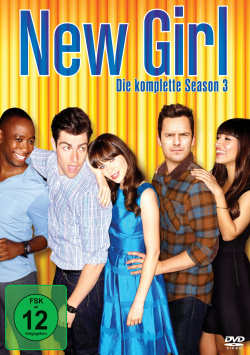 Content: Is there finally a Happy End in the Chaos WG? At least for Jess (Zooey Deschanel) and Nick (Jake Johnson) this seems to be the case. But after the first euphoria the two quickly realize that living together as a couple in the WG is anything but easy. Especially since Schmidt (Max Greenfield) tries everything to torpedo the relationship between the two after it came out that he was together with CeCe (Hannah Simone) and Elizabeth (Merrit Wever) at the same time and both women have separated from him now. When Coach (Damon Wayans Jr.) returns, the time has come for Schmidt to move out of the shared flat and lead his own life - in the apartment opposite. Winston (Lamorne Morris), on the other hand, is in desperate search of a new purpose and seems to have found it in the police service. Too bad he failed the aptitude test and was not admitted to the police academy. There can be no talk of relaxed peace and harmony. A wild Halloween party, a visit by Jess' sister Abby (Linda Cardellini), a confrontation with Nick's ex or a party with pop star Prince also make sure that the life of Jess, Nick & Co. never gets boring...

The third season of "New Girl" also lives on the charm of the characters and the good interaction of the actors. It is always fun to visit this WG. And with Coach's return, a breath of fresh air comes into the somewhat worn figure constellation. Nevertheless, it must also be said that the series in its third year has some small pitfalls. There were already some weaker episodes in the first two seasons. But their number has increased noticeably in this third season. But there are still enough really funny and also really nice moments, which in the end make sure that the 23 new episodes also leave a completely positive overall impression.

These are moments like the enchanting episode around Jess's birthday, a chaotic Thanksgiving camping trip, Jess's desperate attempts to make friends with Coach or Schmidt's plan to seduce the daughter of a rabbi (Jon Lovitz), which loosely compensate for weaker storylines like the one around Jess's sister. Only towards the end does an event noticeably overshadow the humorous scenes. Especially over the last three episodes there is some melancholy and also a certain sadness, from which the series first has to recover. But if you believe the voices from the USA, this is the fourth season after a rather restrained start fully successful.

Although the third year isn't the best of "New Girl", the series still stands out pleasantly from the standard comedy mush. Despite their many weaknesses, the characters are drawn incredibly lovable and the dialogues are often incredibly funny. Here also once the German dubbing deserves great praise, which manages to transfer many of the word jokes successfully into German. Of course, there is a lot of joke lost, which is difficult to prevent with dubbing in general. But all in all, the German version is absolutely successful, both in the choice of speakers and in the dubbing scripts.

However, no matter whether in the original or in the German language version, "New Girl" simply has to be loved. And that's why there's a very clear message for this third season speaker: Absolutely worth seeing!!

Picture + sound: Compared to the first season, nothing has really changed here: The picture is very clean, the colours warm and powerful and there is nothing to complain about the overall sharpness. The Dolby Digital 5.1 Mix lets the amusing dialogues sound clear and powerful from the home cinema boxes, whereby the frontal area in particular is required. The English soundtrack sounds a little more harmonious overall. Good!

Extras: Unfortunately there is not much bonus material for the third season. On the third disc there is a short look at the relationships in "New Girl" (ca. 3:31 min.), as well as a clip about the well-known personalities that are mentioned again and again in the series (ca. 1:47 min.). At the heart of the bonus material are numerous edited and extended scenes (ca. 49:02 min.), in which there are some really funny moments to discover. A few outtakes (approx. 3:29 min.) complete the additional program of the third season.

Fazit: "New Girl" has to struggle with some small hangers in the third season. Nevertheless, the comedy series still works really well in its third year. With the return of Damon Wayans Jr. as coach, who had to leave the series due to other commitments after the pilot success, the Chaos-WG has a new dynamic. And apart from that the series lives on the good chemistry between the wonderfully dysfunctional characters. The DVD box presents the new episodes in the usual good picture and sound quality. With the bonus material, first and foremost the many omitted scenes are absolutely worth seeing. Even if there are a few weaker episodes, the series is still so much fun, that for this speaker it's again absolutely recommendable!