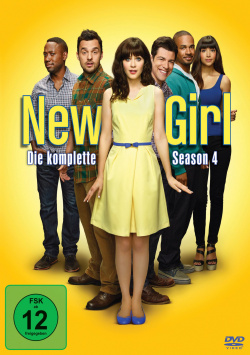 Content: Jess (Zooey Deschanel) and Nick (Jake Johnson) are no longer a couple, but remain friends and roommates. A situation with which they pretend to cope - but they are not really happy. Especially Jess wants to have some real fun again. That's the perfect keyword for Schmidt (Max Greenfield), who wants to teach her how to throw herself at the most attractive bachelors of the evening at the next wedding. When that doesn't really work out, a dating app is supposed to help - but there's no Mr. Right waiting for Jess. But when she has already given up hope, a smart new colleague comes to the school…

CeCe (Hannah Simone) is now also single again - but that also means that there is a new chance for her and Schmidt. Winston (Lamorne Morris) has completely different problems: he has never been stoned before and wants to make up for it before he becomes a real cop. But it doesn't get any better for him after he has passed the exams. Because his new partner just doesn't want to be friends with him. But he's so adorable! Coach (Damon Wayans Jr.) also considers himself to be the crown of creation. He is fighting a model duel with Schmidt and is still chasing after every rock. But then something completely unexpected happens: Coach falls in love…

The third season of "New Girl" was amusing and had some really wonderful episodes to offer. But overall she belonged to the weaker squadrons of the popular comedy series. But with the new consequences, the quality curve is once again clearly going up. The fans get here again exactly what the series has given its very special charm from the beginning: wonderful dialogues (which also work in the German version thanks to the good dubbing), wonderful bizarre jokes and characters, which are not despite, but because of their all too obvious weaknesses and whims incredibly sympathetic.

Naturally, "New Girl" also plays with all the clichés known from countless other comedy series. The individual set pieces used here are anything but new. But the way in which they are implemented works extremely well and ensures that the whole thing looks fresh and fresh. A storyline like the one around Jess and her new British colleague, for example, would have led to countless moments of annoyed eye rolling in any other series - precisely because you've seen something like this happen countless times before and know exactly how this story ends. That may also be the case here. Nevertheless, it just works, because the realization seems surprising and rather unadapted.

Self the emotionally a bit thickly applied finale of the season, which makes one expect the fifth season with melancholy as well as anticipation, never seems too artificial or kitschy, but just beautiful. And on the way there there is a lot to laugh about, which is why season 4 of "New Girl" deserves an "Absolutely worth seeing" again!

Picture + Sound: Compared to the first season, nothing really changed here: The picture is very clean, the colours warm and powerful and there is nothing to complain about the overall sharpness. The Dolby Digital 5.1 Mix lets the amusing dialogues sound clear and powerful from the home cinema boxes, whereby the frontal area in particular is required. The English soundtrack sounds a little more harmonious overall. Good!

Extras: On the third disc there are some nice additional scenes (about 15:19 min.), as well as amusing outtakes (about 3:05 min.). Unfortunately there is nothing more.

Fazit: "New Girl" returns to the old strength with season 4. After a small sag in last season's season, the new episodes once again offer exactly what fans love about this series: delightfully weird jokes, delicious dialogues and lots of heart make almost all episodes of this season a great pleasure. Even if the finale gets a slightly bitter-sweet aftertaste (why, of course, is not revealed here), one is eagerly looking forward to seeing what happens with Jess and her friends in the end. The DVD box with 3 DVDs presents the episodes in good TV quality. The extras are a little bit meager, but definitely worth seeing for fans! And therefore also for season 4 a very clear one applies again: Absolutely recommendable!