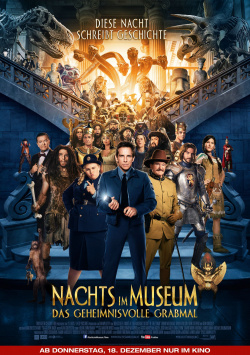 Night at the Museum - The Mysterious Tomb

Night at the Museum Again! Larry Daley (Ben Stiller), night watchman at the New York Museum of Natural History, has become accustomed to the fact that every night the exhibits are brought to life thanks to a mysterious Egyptian table. But then the unexpected happens: the blackboard increasingly loses its magical power and Larry could soon lose all his beloved friends like wax teddy Roosevelt (Robin Williams) or the mini editions of Octavius (Steve Coogan) and Jedediah (Owen Wilson). To find out how they can maintain the effect of the blackboard, Larry and Ahkmenrah (Rami Malek) have to travel to London, where the Pharaoh's parents are exhibited. Arriving in England Larry not only has to deal with new museum pieces and a very affectionate caveman (also Ben Stiller), but also with an overzealous night watchwoman (Rebel Wilson). Help could come from the noble Sir Lancelot (Dan Stevens). But he doesn't get along well with the power of the new life…

At the same time: "Nachts im Museum - Das geheimnisvolle Grabmal" (At night in the museum - the mysterious tomb) is not designed to win over such spectators who couldn't do anything with the first two parts. Rather, director Shawn Levy tries to offer all fans of the first films a round and worthy conclusion. Therefore, we don't want to rant too much about the slapstick, the message about the meaning of family or about the unavoidable pee-pee jokes. It's more about questioning whether Levy managed to bring the story of Larry Daley to a satisfactory conclusion. And the answer, despite all the justified criticism, must clearly be yes.

On the one hand, the third film manages to build a nice bridge to the beginning by giving the three old night watchmen (Dick Van Dyke, Bill Cobbs and Mickey Rooney, who died shortly after the shooting) a small, amusing guest appearance. In addition, all the popular figures from the first two parts will also be there again, from Dino Rex to Capuchin monkey Dexter to the wax figure of Teddy Roosevelt, embodied by Robin Williams, also unfortunately deceased, who is making his last big cinema appearance here. Many popular gags are warmed up in slight variations and Larry's not always easy relationship to his son is again an important topic. So everything looks very familiar, which fans will surely be happy about.

On the other hand Levy tries to spice the old with something new. And that's why Larry can't just meet his Stone Age ego, who of course immediately thinks he's his Da-da, the whole chaos troupe can also go to London. A new museum with new exhibits - including the parents of Ahkmenrah, played by professional Egyptian Ben Kingsley and Anjali Jay, a less friendly dinosaur skeleton and a wax lancelot. It is played by the former "Downton Abbey" star Dan Stevens, who is allowed to show his comical side convincingly at the beginning. But an actor steals the show from all the other actors as well as from the computer-generated exhibits. Who that is is not to be betrayed at this point. Just this much, maybe. This short, wonderfully self-deprecating guest appearance in a London theatre compensates for many a flat gag and almost alone makes going to the cinema worthwhile. The scenes in London are all in all entertaining and fast-paced. Only the question who in Hollywood has ever decided that Rebel Wilson, who always plays the same role, is funny remains a real mystery even after her foreign appearance as a British night watchwoman.

The finale offers a really round and even surprisingly emotional conclusion that leaves nothing to be desired by viewers who like these films. "Night at the Museum - The Mysterious Tomb" may not be a masterpiece overall - and sometimes not even a particularly good film. But for the audience it is made for, the adventurous family comedy is really good entertainment and a worthy farewell to loved characters. And for that there is a very clear one: Worth seeing!