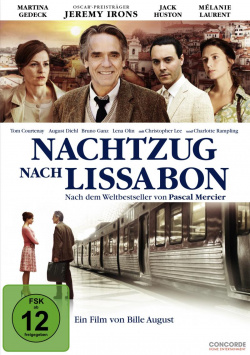 Film: Something is missing in the life of high school teacher Raimund Gregorius (Jeremy Irons), who teaches Latin in Bern. He loves his job, but Raimund hasn't felt passion for a thing or a person for a long time. This suddenly changes when one day, on his way to school, he meets a young Portuguese woman on a bridge who plans to plunge into the depths. The teacher may be able to stop the young woman from her intention and persuade her to accompany him to school, but a short time later she disappears without saying a word. All that remains is her red coat, in whose pocket Raimund finds a book by the Portuguese doctor Amadeu de Prado. The book contains a train ticket to Lisbon, which the teacher uses in a touch of spontaneous adventurousness. On the way, he reads the book that captures him from the beginning. Raimund feels a very special connection with the author of the lines and decides to visit de Prado in Lisbon. His sister Adriana (Charlotte Rampling) tells Raimund that the doctor has been dead for a long time. A bitter setback, but one that does not stop the teacher from embarking on an extensive search for clues. He meets old companions and former friends of Amadeu de Prado and immerses himself in a story full of intrigues, dangers and political resistance - a story that will change Raimund's life forever...

The novel "Nachtzug nach Lissabon" by Pascal Mercier is considered one of the most successful German-language novels of recent years. The highly acclaimed work of the Swiss professor of philosophy was translated into fifteen languages and inspired over two million readers in German-speaking countries alone. The fact that the renowned Danish filmmaker Bille August, who has already proven his hand for the adaptation of complex material with "Das Geisterhaus", was won over for the unavoidable film adaptation proves to be a real stroke of luck. Of course, the film can't reach the dramaturgical and emotional depth of the novel's original. But what August has created here is in any case damn close at hand.

From the first scene on, the director creates a very captivating atmosphere that captivates the audience and won't let go until the end. The production is rather unagitated and consists for the most part of conversations that Raimund has with friends and acquaintances of Amadeu. Yet Lisbon's painterly backdrop and the alternation between the different levels of time and action maintain the tension throughout time. The charming play of Jeremy Irons, the quiet humour that flows into the story again and again, and the touch of romance that can build up to a moving finale without any kitsch, also ensure that this bestselling film is so successful.

"Night Train to Lisbon" is a fascinating story about passion in all its forms. It shows how beautiful and at the same time dangerous it can be, how important it can be for everyone but also for many, how powerful it can be in a positive but also in a destructive way. And above all there is the realization how meaningless our life would be without passion. This is what Bille August conveys in wonderful pictures packed and performed by a great, international ensemble of performers. This is top-class arthouse cinema with high entertainment value, a film that touches, moves and despite many silent moments radiates an enormous power. And there is only one possible rating for that: absolutely worth seeing!

Picture + Sound: The film has some wonderful shots to offer, which are especially effective on the big screen. But thanks to a good overall sharpness, an atmospheric colouring and neat contrasts, the pictures lose nothing of their fascination even in the home cinema version. The German sound is available in a good Dolby Digital 5.1 mix as well as a somewhat more powerful dts track. The quieter moments often dominate, but smaller and clearer sound effects or ambient noises always ensure that the surround channels come into their own. All in all, however, the multilingual original version with German subtitles is preferable, as this gives the film an additional atmosphere, which unfortunately gets lost a little in the purely German soundtrack.

Extras: The bonus material of the DVD has turned out to be a bit mauzy. Besides teasers and trailers there is only one making of, which is informative, but too short with 16 minutes.

Fazit: "Nachtzug nach Lissabon" is a nicely told story about passions, which is carried by the good actors and nice pictures. This film adaptation of the novel thus offers Arthauskost at its finest, which is technically well transported to home cinema on the DVD. The rather meager bonus offer hardly carries any negative weight. Recommended