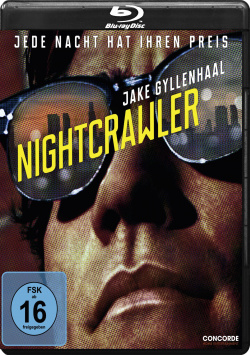 Film: So far the loner Lou Bloom (Jake Gyllenhaal) has financed his modest livelihood by stealing manhole covers, copper or bicycles. But when one night he watches the cameraman Joe Loder (Bill Paxton) filming an accident and learns that good money can be made with drastic shots, he is certain: he also wants to become a "nightcrawler". After he has acquired a camera, he immediately sets off on a hunt for lucrative shots, which he then offers to a TV news station. Although his equipment is still inferior, news chief Nina (Rene Russo) is immediately taken with Lou's unscrupulous way of holding the camera directly at the victims. And so she hires him as a freelancer, not knowing what means he will use to deliver ever more exclusive and spectacular pictures...

With "Nightcrawler" the celebrated screenwriter Dan Gilroy ("Das Bourne Vermächtnis", "The Fall") makes a great directing debut. His extremely atmospheric film is a successful mixture of media satire infused with bitter cynicism and dark city thriller. The film thrives on its intense, atmospheric images of the nightly Los Angeles, but of course also on its great leading actor. Because what Jake Gyllenhaal, for whom the English word "creepy" seems to have been invented here, delivers here as an ice-cold calculating cameraman, is simply great. Gyllenhaal manages to create a character that repels and fascinates the audience at the same time.

The hard fight of the free cameramen for the most shocking pictures possible, which is the focus of the action here, may seem a bit exaggerated at times. However, if you take a closer look at the articles on the American news channels, it quickly becomes clear that the story of "Nightcrawler" is probably closer to reality than you might imagine. Especially the strong pressure, under which a not so young news chief like Nina is standing, probably hits the nail on the head.

What makes the character of Lou Bloom so fascinating is his ability to manipulate his fellow men and to misuse them for his purposes. Alone the discussion with his intern Rick (Riz Ahmed) about a salary increase, where he cleverly gives Rick the feeling that he has all the trumps in his hand, only to fob him off with a still puny salary, is both excellently written and played first class. It's such moments, paired with the dense atmosphere, that make the movie so thrilling and extremely entertaining despite the many very quiet moments.

"Nightcrawler" is a very clever, cynical and brilliantly played look into the abysses of sensational journalism and a society that wants to be fed with shocking news for breakfast. A great directing debut that underlines how talented and versatile Jake Gyllenhaal is. But there is a very clear one: Absolutely worth seeing!!

Picture + sound: Technically, the Blu-ray delivers exactly the good standard that can be expected from a current studio production. The picture is absolutely clean, the atmospheric colouring and overall sharpness are convincing and there is hardly any reason to complain when it comes to matching contrasts and black values. The very special atmosphere of the nightly Los Angeles comes so very well to the validity. The sound, which is available in a pleasantly lively DTS-HD Master Audio 5.1 mix, transports the dialogues and the sound backdrop of L.A. harmoniously from the loudspeakers and also has some good surround moments to offer. Good!

Extras: The only area where the disc disappoints is the bonus material. More than a 5:15 minutes long promo-making of and the trailer is not to be seen here. Schade!

Fazit: "Nightcrawler" is a great mixture of dark drama and bitter satire, which can inspire with a fascinating atmosphere and a great Jake Gyllenhaal. A movie that's great entertainment, yet also very thought-provoking. On Blu-ray, the very special atmosphere of the nightly L.A. can unfold well in home cinema. With bonus material, on the other hand, the disc is disappointing. But that's no reason to leave this great work in the shop. absolutely recommendable]