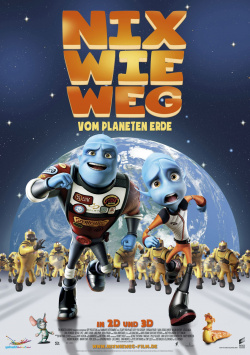 Scorch Supernova is a true superhero on his home planet Baab. He faces every danger, no matter how great, and every adventure, no matter how dangerous, he masters with bravura. That he would not manage all the heroic deeds without his brother Gary, who leads the operations from the Mission Control of the BASA control base, that not only overlooked his admirers. Scorch himself doesn't really appreciate his brother's work either. And at some point, Gary will be done with it. After a fight he quits his job and Scorch has to make his own way to the dangerous planet Earth, from which nobody has returned yet. And indeed, Scorch Supernova also falls into the trap of nasty General Shanker, who puts Scorch in the infamous Area 51 with numerous other alien prisoners. And now Gary of all people is the last hope to get his brother out of there alive…

"Nix wie weg - vom Planeten Erde" is a colorful, somewhat chaotic animation adventure. Some scenes may be borrowed from other movies like "Monsters vs. Aliens", Gary may be very reminiscent of Kif from "Futurama" and a gag about what the aliens captured on earth did for mankind may have been stolen almost 1:1 from the comedy "Paul". But even if the animation fun lacks its own ideas, it still has some really amusing jokes and nice characters to offer, which together with the rapid pace of the production keep the entertainment value at a good level.

The idea that people have been luring aliens into the trap for decades and keeping them trapped in Area 51 offers a lot of potential. In some scenes this is also really well used. Moreover, the machinations of the unscrupulous Shanker, in the original wonderfully spoken by William "Captain Kirk" Shatner, lend the story a little child-friendly tension. But the side story strands like the Loser father's obligatory fight for his son's recognition, the not exactly new conflict between the brothers or secret machinations within the BASA control base, are simply too unimaginative to adequately support the good ideas of the script.

So "Nix wie weg - vom Planeten Erde" is a nice animated movie for little alien fans. No more, but no less. A few nice 3D effects make sure that the young target audience gets their money's worth. But in direct comparison with technically and dramaturgically more sophisticated works by Pixar or Dreamworks, the film cannot keep up. And despite some really good jokes, which you can laugh about even as an adult, the pleasure for viewers over 12 years is very limited. For children, who like it colorful and fast, there is nevertheless a clear one: Worth seeing!