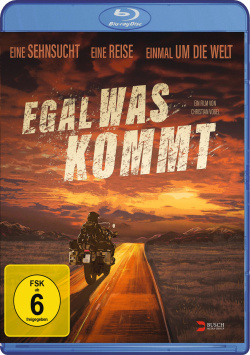 No matter what comes - Blu-ray

Film: Television journalist Christian Vogel makes a drastic decision: At the age of 34 he has reached a point in his life where he has to ask himself if he is really happy with what he is doing. And since he comes to the conclusion that he wants to fulfill a big life dream so that he doesn't have to ask himself later if he missed something, he quits his job, quits his apartment and scrapes all his savings together. After extensive preparations he plans to circumnavigate the earth on a motorcycle. All alone. For many months separated from his girlfriend and his family, Vogel embarks on a journey into the unknown, which brings with it many great encounters, unique experiences but also unexpected dangers. But then a serious accident threatens to destroy the dream before the goal is reached…

"No matter what happens" is a gripping documentary that takes the viewer on a fascinating journey. Fascinating because the experiences that Christian Vogel has made show that even in the most remote places in the world, despite all the differences, there are so many similarities between people. That there is helpfulness and humanity everywhere - even in places where you might not expect it. But the film also shows the risks involved in having an accident in a country where you don't understand the language, customs and proper dealings with the authorities or the police.

While the first minutes, in which bird travels through Canada to Alaska, simply fascinate scenically, it becomes at the latest with the constant monitoring in China or the accident in India also dramaturgically really exciting. What is perhaps a little unfortunate is the fact that the beautiful, relaxed moments are relatively quickly ticked off, while the stresses and strains and the consequences of the accident are a little too much time devoted. However, this is understandable when you finally see the movie as a big plea for cosmopolitanism and humanity.

If you like extraordinary travel documentaries like Ewan McGregor's "Long Way Down", you will get your money's worth. Therefore there is, despite some minimal lengths, for this rousing motorcycle trip around the world a clear: Absolutely worth seeing!

Picture + sound: The image of the documentation is clean, the sharpness of the image is at a good level in most moments and also the colouring is absolutely convincing. The DTS-HD Mix makes the interviews sound easy to understand, music and some well-captured ambient noises also provide some movement in the surround range. For a documentation absolutely in order, therefore there is here a deserved: Good!

Extras: As a bonus there is an extensive interview with Christian Vogel about the making of the documentary (ca. 30:04 min.). Four unused scenes (approx. 26 min.), including a long version of the first aid course or a visit to Nepal, as well as the trailer for the film are also included in the worth seeing additional offer.

Fazit: "No matter what happens" is a gripping documentary that takes its viewers on a fascinating and exciting journey around the world. The Blu-ray presents Christian Vogel's rousing video diary in good picture and sound quality and also has about an hour of worth seeing extras on board. That's what it's all about: absolutely recommended!