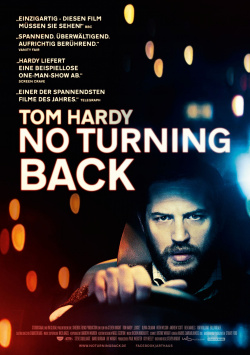 Actually, Ivan Locke (Tom Hardy) is not only a family man and husband, but also an absolutely reliable skin in his job as construction manager. But on the eve of the most important delivery of concrete for the foundations of the major construction site, which he supervises, Ivan makes off. He tries to use the long car journey from Birmingham to London to maintain the order in his life, which he has so carefully built up, in endless telephone calls. He does his best to reassure his boss, prepare his young colleague to take charge of the concrete delivery and persuade his wife to stay with him. But the closer London gets to London, the clearer it becomes that Ivan's life at the end of this car journey will no longer be the same and that what awaits him in London could cost him everything he has lived for so far…

"No turning back" is a courageous and impressive work on various levels. Admittedly, it's not the first film that takes place in a very cramped space and is only worn by one actor. There was something similar to the thriller "Buried" with Ryan Reynolds. What makes Steven Knight's highway drama a bit more courageous in a direct comparison is the fact that "No turning back" doesn't use classic tension elements, but tries to reach its captivating potential by having the audience watch a normal man trying to contain the big consequences of a small mistake and how he more and more loses control over his life.

The atmosphere Knight creates is absolutely oppressive and in some ways captivating. However, this also awakens the expectation of a really big bang, which never really comes. It's really nothing more than Locke sitting in the car talking on the phone. Those who hope for more from the story or at least expect a surprising or emotionally intense resolution will be disappointed. Because "No turning back" is a one-man-show that is kept simple in every respect, but works well exactly because of that - as long as you can get involved. Because what Ivan Locke is struggling with here can theoretically happen to any viewer - in contrast to what Ryan Reynolds is going through in "Buried". And this atmospherically densely staged closeness to reality can also be perceived as exciting.

However, no matter if you are captivated by the action or if the whole thing is only perceived as soporific boredom, Tom Hardy's outstanding performance is undeniable in any case. How Ivan Locke desperately tries to always remain calm and prudent, even when his interlocutors freak out or insult him, is just as intensely played as the brief glimpses into the abysses of Locke's soul, which he reveals when he engages in angry dialogues with his late father. Hardy really shows a great performance here, which saves the film even over its numerous lengths.

The only question that remains is whether you really need to see this work in the cinema. While in "Buried" the dark cinema hall has intensified the claustrophobic atmosphere of the movie even more, in "No turning back" there isn't a single aspect that is intensified in any way by watching it on the big screen. Anyone who decides to buy a cinema ticket for this chamber play should definitely approach the film with the right expectations. Neither visually nor dramaturgically more should be expected than realistic simplicity. If that's enough for you, you'll definitely get a great Tom Hardy for your money. And under these conditions the drama deserves a very clear "worth seeing"!