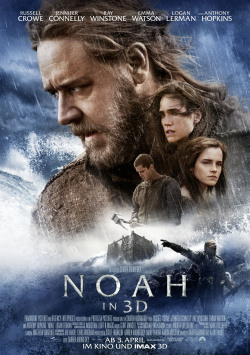 With his passion project "Noah" the acclaimed filmmaker Darren Aronofsky had already caused a lot of discussion and controversy long before even one second of the film could be seen. After all, religiously influenced material can easily stir people's spirits - especially when someone dares to write a text from the Bible and then does not stage it completely true to the original, but delivers a very individual interpretation. And that's exactly what Aronofsky does with "Noah". On the one hand, he sticks closely to the core of the biblical story in which the earth is doomed to destruction and Noah (Russell Crowe) is chosen by God to build an ark to enable a new start after the coming Flood. But Aronofsky takes the story much further, fills in gaps with his own ideas and at the same time tries the seemingly impossible - his version of the biblical Flood is supposed to inspire believing viewers as well as those who have little to do with religion.

This becomes especially clear in the scene in which Noah tells the story of creation. While his voice can be heard as Voice Over commentary, Aronofsky conjures up a rapid collage of images on the canvas, which wants to show that the idea of religion and science can definitely be combined. Combining the view of a creator with the theories of evolution is a very courageous step, but the filmmaker has mastered it skillfully. He will certainly not be able to dissuade anyone from his convictions, but at least he makes it clear that a coexistence of several views is possible in such important, yet highly sensitive topics.

Superficially, this version of "Noah" may almost seem like a fantasy film. There are stone giants and strange looking animals, big battles and destructive storms, all realized with great special effects. Admittedly, this has very little to do with dry religious instruction. But a look beneath the surface shows that Aronofsky has created a powerful portrait of a man who, under the burden imposed on him by his creator, is almost driven mad, but who nevertheless clings to his faith and convictions. On the one hand, there are always aspects that make it clear why Noah and his wife never doubt for a moment that his visions could be a message from the Creator. The help of the stone giants, who are actually fallen angels, the way in which the barren environment is suddenly turned into a fertile piece of land by the seeds of Eden that Noah receives from his grandfather (Anthony Hopkins), which offers everything needed to build the ark, the appearance of the animals - all these are very clear signs.

At the same time, however, Aronofsky also shows doubts as to whether Noah actually correctly interprets the message that was conveyed to him. And this is exactly where the film's very important message lies: there is no unambiguous truth. The interpretation of religious texts is always also a matter of one's own interpretation: How else can it be explained that some preach about a peace-loving God, while others use the same text to discriminate or even kill in the name of God? The example of Noah makes it clear what fatal consequences a wrong interpretation can have. And in the end only one question remains unanswered: does he almost break with the fact that he has become aware of this wrong interpretation or with the fact that he still believes that his interpretation of the visions was the only right one and that he therefore failed?

Whether the rather action-heavy side-story with Tubail-can (Ray Winstone) really needed it to convey the message of the film, it can be doubted. His portrait of the arrogant man, who sees himself as the crown of creation and places his needs above everything else, is too striking. Certainly, Winstone's performance is very good and his figure also brings some tension into the game. But it is not really necessary for the film. The same could also be said for Anthony Hopkins as Methusalah, especially as he is only seen very briefly in the much too long film. But as he makes it clear in a wonderful scene that the great beauty of our world can sometimes lie in the small, his character then still gives a deeper meaning.

No question, the spirits will divide on "Noah", this can't be prevented in principle with a religious theme as already said. Even Aronofsky's sometimes somewhat bulky and lengthy staging is certainly not everyone's cup of tea. What can't be denied is that the film is visually absolutely fascinating (even if the 3D conversion is absolutely unnecessary) and that the staging is very ambitious and in many respects also very courageous. That alone makes this work absolutely worth seeing! Everything else is what religion actually should be: a very personal view, which one should not necessarily share, but in any case respect!