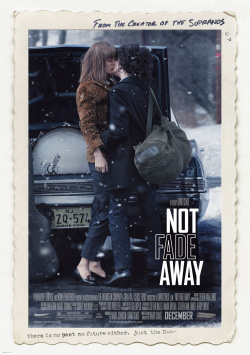 New Jersey in the 1960s: Douglas Damiano (John Magaro) dreams of becoming a great rock star. Like his great role models, the Beatles and the Rolling Stones, he not only wants to reap wealth with music, but also conquer the hearts of girls - and especially those of beautiful Grace (Bella Heathcote), who apparently has a weakness for musicians. When Douglas joins the band in which his buddy Gene (Jack Huston) also plays, he soon gets his first chance to make an impression on Grace. Because when Gene accidentally swallows a joint at a party where they are supposed to play, Doug is allowed to take over the part of the lead singer. As this is very well received not only by Grace, but also by the other members of the band, the tensions between Douglas and Gene grow. And the closer he gets to the wife of his heart and his dream of a career as a musician, the further he moves away from his old friends and family…

The story of "Not fade away", the directorial debut of "Sopranos" inventor David Chase, is strongly autobiographical. It's obvious to the film that the director has incorporated many of his own experiences into the action. Chase succeeded very well in capturing the atmosphere of life in a small suburb in the 1960s. While the music, the hairstyles and clothes of the characters, as well as the equipment very nicely capture the zeitgeist of the late 60s, it's the small snapshots that make this film seem so timeless. Whether it's Douglas' raptures, the conversations between the young musicians or the conflicts between Douglas and his father (James "Tony Sporano" Gandolfini in one of his last roles), everything seems very authentic and can easily be transferred into the new millennium. Also the fact that Chase cast most of the roles with relatively unused faces makes the characters even more real and therefore more accessible for the viewer.

Alongside all the positive points, some less successful aspects also cloud the viewing pleasure. Thus the story splashes along uneventfully in many moments, rushes through the events and lets many weeks pass in a few seconds, while other moments remain in tenacious slowness. But much of it is captured, as long as the viewer can let himself be driven by the very special atmosphere of the production. Only the last 15 minutes have a really negative effect. In itself, there is a perfect point at which the movie should end. This moment is indeed a little kitschy and a little clichéd. At the same time it's just beautiful and the perfect ending for this coming-of-age story. The final quarter of an hour looks like carefree glued to it. Even though Douglas' aimlessness is perfectly realized here, the viewer still wonders what the whole thing is all about until the sudden and not very satisfying ending comes.

Except for these small weak points "Not fade away" is a really nice movie, that plays in a league with "That thing you do". Although this directorial work by Tom Hanks is a little more cheerfully and straightforwardly staged, it exudes a mood similar to that of David Chase's directorial debut. Who loves the music of the late 60s and appreciates more demanding youth dramas, this very special music film can be warmly recommended to him. Worth seeing