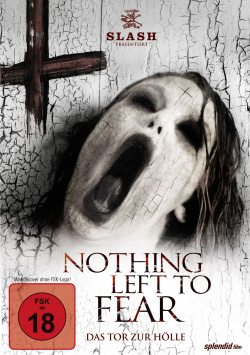 Nothing left to fear - DVD

Content: When Dan (James Tupper) is supposed to take over the position of pastor in the small town Stull in rural Kansas, his wife Wendy (Anne Heche) is especially happy about the new beginning. The idyllic new house and the extreme friendliness of the old pastor (Clancy Brown) gives hope for a happy future. Only daughter Rebecca (Rebekah Brandes) can't really share the enthusiasm of her parents and her two siblings Christopher (Carter Cabessa) and Mary (Jennifer Stone). Not only is there hardly anything for a girl her age to do here. Rebecca also has the very bad feeling that something is wrong here. But these reservations are quickly forgotten when she meets the charismatic Noah (Ethan Peck). Quickly the girl is on fire for the mysterious boy and does not pay attention to the strange occurrences, which confirm her first fear. Because behind Stull's idyllic façade lies one of the seven gates to hell. And Rebecca and Mary play a central role in a deadly ritual that is supposed to open this gate forever...

"Nothing left to fear" is the feature film debut for several participants. Director Anthony Leonardi III makes his debut here and also for author Jonathan W.C. Mills it is the first film script. Cameraman Martin Coppen, who previously directed music videos (e.g. for Metallica), also tries his hand at a feature film for the first time in this horror thriller. This is the assumption that the strip produced by Guns N´Roses guitarist Slash is really successful. The movie looks very good and especially in the first half of the movie you never get the feeling that you would see a cheap B-movie here. The script perfectly establishes the deceptive small town idyll and the director builds up a dark mood, which creates some good goose bumps.

It's the creeping threat that makes the film so effective at the beginning. The whole thing is not exactly new for connoisseurs of the genre, but it works really well here. The decent actors like Clancy Brown or Anne Heche and James Tupper, who have already worked together in the series "Men in Trees", support this positive impression even more. Unfortunately, it does not remain with the rather subtle creep. Towards the end, only a few convincing special effects and a dramatic chaos take over. The fact that the last twenty minutes are extremely dark doesn't exactly help to keep the viewer's confusion within bounds.

It's to the creators' credit that the final scene remains somewhat ambiguous. The viewer is not served the resolution of the story too obviously on the tray, which in itself is a positive thing. Especially in the horror genre you often get the feeling as a viewer that you are considered stupid. But unfortunately the finale that leads to this last sequence is so chaotic and confusingly staged that a little more clarity would have been desirable. But this gives the impression that the makers did not really know how to resolve the good start. Too bad, because "Nothing left to fear" would undoubtedly have had the potential for a better and creepier ending.

Notwithstanding, the movie offers good genre entertainment over long distances. The atmosphere is threatening enough and the smaller goose bumps are too good to be destroyed by the rather unsuccessful end. If you are looking for solid occult horror with some strong moments and if you don't mind the loss of quality in the last twenty minutes, this home cinema premiere can be recommended to you. And so it's true: worth seeing with some small compromises!

image + sound: No matter what you might think of "Nothing left to fear", there's one thing you can't deny about the film: it definitely doesn't look like a cheap B-movie. The partly really great and atmospheric camera work is shown to advantage on the DVD. The picture is clean, the overall sharpness is convincing and the atmospheric colouring is also pleasing. Even though some scenes are mixed very dark at the end, a positive overall picture prevails at the end. The sound is also very atmospheric, with small sound effects in particular providing pleasant goose bumps in the first half. Towards the end, the effects become clearer, which leads to more dynamics, but is not as effective as the more subtle sound effects. The bottom line is a satisfied one: Good!

Fazit: "Nothing left to fear" is a neat horror thriller, which just in the first half visually and atmospherically triumphs over dramaturgical clichés and in some moments can even give you goose bumps. The end is a bit overloaded and confusing, which clouds the otherwise positive overall impression a little. However, if you like supernatural, rather quiet horror thrillers, you'll get at least at the beginning a really good shot. And therefore, despite the rather disappointing finale, there is one more thing: Recommendable!