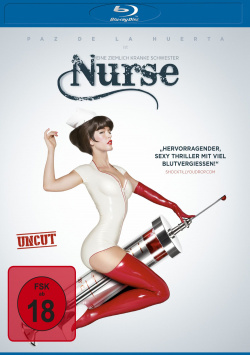 Film: During the day nurse Abby (Paz de la Huerta) sacrificially looks after the patients of a New York hospital. But in the night the charming young woman turns into a sexy vamp who goes on a hunt for unfaithful men. And if she gets hold of such a specimen, she first deprives the men of their minds with her feminine charms, before she then blows out the light of their lives in the most cruel way possible. When Abby is supposed to take care of Danni (Katrina Bowden) in the hospital, she thinks she has found a soul mate in the attractive woman. She wants Danni for herself. To bind her, Abby even kills Danni's disloyal stifffather Larry. But when Danni rejects her, Abby's fuses finally blow and she starts a merciless revenge campaign...

"Nurse 3D" is an extremely bloody and especially at the beginning amusingly bad work, which looks really good despite a rather small budget. Director Douglas Aarniokoski has found atmospheric locations in Toronto, Canada that are perfectly suited to convey the illusion that the story is actually set in New York. When Abby strikes, the 3D cameras are used very well, although the sometimes rather brutal sequences also work very well in the 2D version. Paz de la Huerta, known among others from the award-winning series "Boardwalk Empire" proves to be a very good choice for the role of the "quite sick sister". Because on the one hand the actress seems somehow quite wicked and also a bit broken, on the other hand she radiates a really dangerous attractiveness, which is intensified by her very relaxed way of dealing with nudity in front of the camera.

Katrina Bowden ("30 Rock") is perfectly cast as the exact opposite of the man-killing Abby. As already in the wonderful horror comedy "Tucker & Dale vs. Evil" she mimics the brave, somewhat naive blonde, who, pushed into a corner by Abby, has to outgrow herself and has to extend her claws against her real nature. The evil duel that the two ladies have to fight in the second half of the movie is really something to be proud of.

However, the movie takes itself a bit too seriously. The cynical-macabre undertone that the script shows at the very beginning drowns towards the end in the blood Abby sheds. And as a serious horror flick the whole thing doesn't really want to work out. For that, the premise is just too weird and the way in which some of the victims are transported to the afterlife is too wacky. As a horror comedy, "Nurse 3D" is really worth seeing - provided you're not exactly a delicate person. If the film had revealed itself to be more obvious than a shock not meant to be serious at the finale, this bloody visit of Sister Abby would have been a thoroughly successful pleasure. At least it's enough for a really entertaining and at times pleasantly original stay in a hospital, which might be a real horror vision, especially for notorious strangers. Despite minor dramaturgical weaknesses, the bottom line is quite clear: worth seeing!

image + sound: The image quality of the tested 2D version is completely convincing. The sharpness of the image is also at a very high level in the detail display. Only in very dark scenes do smaller losses in quality have to be accepted. The colour scheme is very atmospheric and changes from undercooled to extremely powerful depending on the mood - whereby red is particularly effective here. The sound is in a pleasantly lively DTS-HD 5.1 mix, which transports the dialogues out of the speakers in a well understandable way and can otherwise convince with a few good surround effects as well as a proper mixing of basses. Good!

Extras: As a bonus, there is a very interesting audio commentary by director Douglas Aarniokoski, which tells you about the shooting in Toronto, the difficulties of shooting in 3D and at sub-zero temperatures or about the different locations. Since there are unfortunately no subtitles to the commentary, only interested viewers with a good knowledge of English come to enjoy this really good commentary. Besides there is a short making of (about 8:08 min.), as well as video diaries of Katrina Bowden and Corbin Bleu (about 5:47 min.).

Fazit: "Nurse 3D" is not a masterpiece, but this extremely bloody visit of nurse Paz de la Huerta offers entertaining entertainment. The story could have taken a little more of the biting irony that is noticeable at the beginning, especially in the second half. But some amusing and funny moments and the quite atmospheric realization make this sexy shocker to an amusing horror flick, that presents itself on Blu-ray in good picture and sound quality and also has some nice extras on board. Recommended