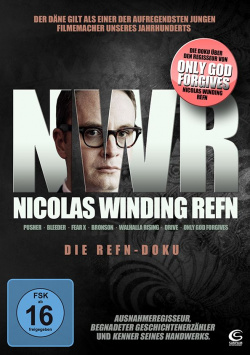 Content: With his "Pusher" films, Danish filmmaker Nicolas Winding Refn has gained a reputation as an inappropriate, visionary and innovative director - a reputation he has impressively underpinned with later works such as "Bronson", "Valhalla Rising" or "Drive". Reason enough for Laurent Duroche to accompany the exceptional director with his camera during the preparations for his film "Only God Forgives" in Thailand and to follow the traces of his past with him in Denmark. In addition to Nicolas Winding Refn himself, his parents, his wife, the actors Mads Mikkelsen, Ryan Gosling and Zlatko Buric also have their say. In "NWR" an interesting, revealing and honest portrait of a not undisputed artist is created, which especially his admirers, but also the audience interested in filmmaking in general, should definitely take a look at.

Because not only the preparations for the shooting offer some very interesting insights into the creation process of a film. Also the very open and detailed discussions about Rehn's first steps in the film business, the first hurdles he had to overcome or the setbacks in commercial, but also artistic terms are more than revealing. When Refn self-critically talks about the arrogance and self-overestimation with which he approached his first film shooting and what he learned about himself and his work as a director in the course of the next projects, it just seems refreshingly honest. There are only a few statements of the other interviewees, who seem a little too glorifying and also a little arrogant.

This primarily concerns the filmmaker Alejandro Jodorowsky, who at first describes Steven Spielberg and his associates as idiots, demonizes Hollywood as the downfall of all film culture and sees Nicolas Winding Refn as the only filmmaker who would have given him back his belief in cinema. Admittedly, Refn is a very exciting and certainly also a good filmmaker in his unadapted way (even though I personally couldn't do anything with "Only God Forgives" as opposed to "Drive"). But to dismiss every filmmaker who works more in the mainstream direction as an idiot and to see a kind of cinematic messiah in Refn goes a bit too far. Such utterances seem like an exaggerated adulation, which neither the film nor the director would have needed.

Beyond such small disturbing factors, "NWR - Die Nicolas Winding Refn Doku" is an absolutely worth seeing portrait, an exciting excursion behind the scenes and a small insight into an unusually working artistic spirit. And there is a clear one for that: Worth seeing!

Picture + sound: The current interviews are audiovisually on a good documentary level. The picture is clean, the colour scheme is harmonious and the Dolby Digital 5.1 mix transports the voices out of the speakers in a way that is easy to understand. When playing in older film excerpts, on the other hand, there are a few fuzziness and other shortcomings from time to time, but these can be traced back to the source material (such as a short film or an old trailer) and should not be regarded as a weakness in the technical implementation of this DVD. All in all there is a more than satisfied one for them: Gut!

Extras: As a bonus there are only a few trailers, among others for Refns "Fear X".

Conclusion: "NWR" is an informative and entertaining documentary that not only allows an interesting look at the process of making a film by the award-winning director, but also provides a comprehensive account of the life and work of Nicolas Winding Refn to date. Even if you might not agree with all statements of those involved in this documentary, "NWR" has become a very successful, entertaining and informative portrait about one of the very special filmmakers of our time. absolutely recommended!