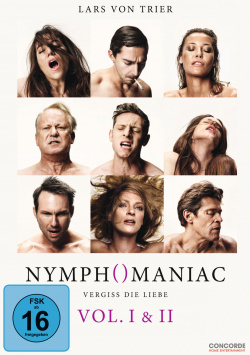 Film: The reclusive bachelor and passionate angler Seligman (Stellan Skarsgård) finds the brutally beaten Joe (Charlotte Gainsbourg) on a cold winter evening in an alley in front of his apartment. Since she does not want him to call the police or a doctor, Seligman takes the ill-treated woman to his apartment, where he takes care of her wounds. The two begin a long conversation about Joe's life, in which it quickly became clear that she was a nymphomaniac. In eight stages, Joe talks about the early awakening of her sexuality, her relationship with her father (Christian Slater), her first sexual experiences as a young girl (Stacy Martin), her first relationship with Jerome (Shia LaBeouf), and the ever-increasing difficulty of finding sexual fulfillment, which eventually degenerates into sadomasochistic tendencies. The longer Joe tells, the more her descriptions condense into a disturbing psychogram and an unusual life story in which a happy ending seems impossible...

Due to von Trier's pictorial language, the play with colours, the subtly applied humour and some obvious quotations from his own oeuvre, this overlong psychogram is absolutely worth seeing, at least for those viewers who appreciate the director. Especially when Seligman equates Joe's sexual escapades with the rules of fishing, there are some visually excellent and in his special way amusing scenes. Nor can Trier be denied that he creates some images that literally burn themselves into the viewer's memory and leave a lasting impression there, whether you like it or not.

However, the filmmaker always goes beyond his goal with his desire for provocation. This is especially true for the Director's Cut, whose even clearer sex scenes wouldn't really have been necessary for the dramaturgy. Moreover, the second part has an extremely disturbing scene to offer, which brings back unpleasant memories of von Trier's controversial "Antichrist". Such scenes don't seem to have any dramaturgical added value whatsoever and are only used as a shock moment, which, despite the many strong aspects of the two films, leaves an unpleasant aftertaste at the end.

In addition, the question also arises as to whether it really takes four or more than five hours to tell this story. Certainly, the descent into the dark depths of the psyche of nymphomaniac Joe is quite interesting, multi-layered and very well elaborated on one level. On the other hand, the whole thing is also very bulky and long-winded (the first minutes of the movie are only a black picture with a subtle sound). So the film is neither something for viewers who are not familiar with the director's work yet, nor something for tender minds. But since the actors can really convince (especially Stacey Martin as a young Joe delivers a remarkable performance), the playful visual language is sometimes really fascinating and the story has very strong moments, there is for all Arthaus lovers who appreciate provocative challenges, a clear: Worth seeing!

Picture + sound: Good overall sharpness, warm colours, coherent contrasts and a neat presentation of details ensure that the visual conversion of the two-part on DVD leaves an all-round positive overall impression. The sound is available as an atmospheric Dolby Digital 5.1 mix, which primarily uses the frontal channels. For a real surround fireworks display, the action is simply much too quiet. But smaller ambient noises or sound effects ensure that a little life can also be felt in the multi-channel area. Good!

Extras: As a bonus on the second disc there is an interview with Charlotte Gainsbourg, Stellan Skarsgård, Stacy Martin and Shia LaBeouf with a total running time of almost 43 minutes. That's not much for such a controversial and extensive work. But altogether these interviews are not completely uninteresting!

Fazit: "Nymphomaniac" is an overlong psychostudy, with which director Lars von Trier once again presents himself as a provocateur and unadapted enfant terrible of the international arthouse scene. Whether in the almost four-hour cinema version or in the more than five-hour-long, more explicit and also more disturbing Director's Cut, the two parts of the drama are nothing for von Trier newcomers, tender minds or viewers who are otherwise only used to mainstream cinema. A film you'll love or hate - there's not much in between. Anyone who appreciates Lars von Trier and his very individual style will not be able to avoid this work either. And for such viewers, the following also applies: Despite their considerable lengths, it is highly recommended!