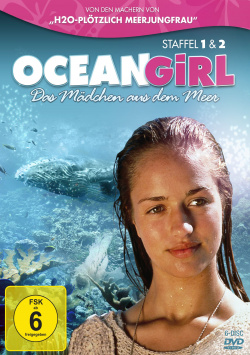 Content: Jason (David Hoflin) and his brother Brett (Jeffrey Walker) are not very enthusiastic about having to move to the ORCA marine platform with their mother, marine biologist Dr. Dianne Bates (Kerry Armstrong). But they quickly find new friends here and realize that they can discover many exciting things on and around the research station. And this is exactly what happens during an expedition where they get to know the girl Neri (Marzena Godecki). She lives alone on a lonely island, but her real element seems to be the sea. Not only can she dive deeper and longer than anyone else. Her best friend is also Wal Charly, with whom Neri can communicate telepathically. The two brothers make friends with the mysterious girl and want to help her find out more about her origins. But the company URBI is also after Neri and wants to make use of her abilities. In order to achieve this goal, the company's unscrupulous henchmen do not shy away from anything...

"Ocean Girl" is an Australian adventure series of which 78 episodes were produced between 1994 and 1997. Although the series came to an end seventeen years ago and has not been shown on German television for a long time, it still has a high cult status among many. Now all fans of Neri and her friends can look forward to Pandavision releasing the complete series on DVD. The box with the first two seasons starts off with a total of 26 exciting episodes on six DVDs.

But not only children of the 90s can enjoy this release. Even if some aspects of the production - such as the hairstyles (especially from the beastly Vanessa) or the technical equipment - are a little outdated, the series still works really well and offers children exciting entertainment. This starts with the research station ORCA, which is especially fascinating for young spectators. With its futuristic design and numerous gagets, it is a real adventure playground for children. But also the friendship between Neri and Wal Charlie, as well as the charming fantasy elements of the story are responsible for the fact that "Ocean Girl - Das Mädchen aus dem Meer" is a simply timelessly beautiful children's series.

Naturally the dialogues are kept quite simple and the characters are drawn very one-dimensional. Strictly speaking, the villains of URBI are only changing clichés. But this is compensated by the very charming portrayal of the young heroes of the series. The series also takes the time to tell its story and doesn't use hectic cuts and hectic, loud action, as you unfortunately get to see in series for kids far too often nowadays. "Ocean Girl - The Girl from the Sea" is much more than just TV nostalgia for adult fans, but a loving fantasy adventure that can now enchant a whole new generation on DVD. Therefore applies to this first series box: Absolutely recommendable!

Picture + sound: The picture and sound quality of the DVD is the age of the series quite noticeable. The episodes are presented in the original 4:3 full screen format. The colours are quite powerful and the overall picture sharpness is on a good TV level. However, there is always visible image noise, which also affects the sharpness of detail. In addition, smaller soiling can be spotted every now and then. For twenty years old raw material, however, the overall result is quite okay. The same applies to the stereo mix, which lets the voices sound clear and understandable from the home cinema speakers, but which also reproduces ambient noises and smaller sound effects relatively bluntly.

Extras: The box unfortunately doesn't have any bonus material except for a booklet with episode guide.

Fazit: "Ocean Girl - The Girl from the Sea" is still an absolute cult series for many children of the 90s. After the fantastic stories about Neri and her friends had not been seen on TV for a long time, a new generation now has the opportunity to get to know this beautiful and exciting children's series. Some aspects such as hairstyles or computers are already somewhat outdated. But overall, the series is pleasingly timeless and is still a lot of fun twenty years after its first broadcast. The first DVD box offers all episodes of the first and second season, as well as a booklet with an episode guide. For TV nostalgics and fans of charming children's adventure series absolutely recommendable