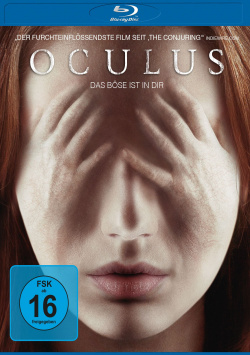 Film: For eleven years Tim (Brenton Thwaites) was in a psychiatric institution after the violent death of his parents. For his 21st birthday he can finally start a new life in freedom. His sister Kaylie (Karen Gillan) seems to have already done that. But shortly after the reunion it becomes clear that the past will catch up with the siblings one last time. Because they are convinced that a mysterious mirror is responsible for the death of their parents. And that's the mirror Kaylie's been looking for. You only have two days until the damn thing is shipped to its new owner. Two days on which they will try everything they can to destroy the mirror and break the dark curse. But evil cannot be put in its place so easily...

"Oculus" is based on a short film directed by Mike Flanagan in 2006. Based on the basic idea he created a decent horror story, which has some effective moments to offer, especially in the first half. The story consists of two levels of action: While Kaylie and Tim try in the present to destroy evil in the mirror, flashbacks tell how they moved into a new house as children with their parents (Katee Sakhoff, Rory Cochrane), where that mirror soon causes a considerable disturbance of family peace. To create a creepy atmosphere here, Flanagan uses very conventional means. Nevertheless, some of them are extremely effective, so that a proper voltage level is achieved.

The film can also maintain this until the end. There are always slight lengths and scenes that are a bit too much about a goose-skin effect. But all in all a quite positive overall impression dominates, which should find approval especially with lovers of something more discreet, bloodless creepy. Actorly the whole thing is on a decent level, but none of the actors takes a prominent position. Karen Gillan, known from the series "Doctor Who", for example, makes great efforts to portray Kaylie, who is possessed by the mirror, in a credible manner. However, the script simply lacks depth so that it could achieve this in the end. But fortunately, extremely wooden representations, as you often find them in the horror genre, don't interfere with the viewing pleasure.

Thanks to the successful mixing of the two time levels and some good creepy effects, "Oculus" is a successful contribution to the creepy genre until its satisfying end, which deserves a very clear "worth seeing"!

Picture + sound: The technical realization of the horror film is pleasantly atmospheric. The picture is absolutely clean and also scores in the numerous darker scenes with a decent detail display. The color scheme is very harmonious and also the well tuned black values contribute to the fact that the mood of the movie can unfold well in the home cinema. The DTS-HD 5.1 mix also contributes to this, perfectly accentuating the film's good sound design, which is responsible for some goose bumps. Apart from that, the dialogues, the music and the various smaller sound effects are also well coordinated, so that an overall positive impression is created.

Fazit: "Oculus" is an atmospheric horror thriller, which does without the really big shock moments, but can still please with some successful tension moments and effective goose bumps scenes. The Blu-ray presents the film in good picture and sound quality and also offers interesting bonus material such as the original "Oculus" short film. For lovers of the more discreet horror this disc is definitely recommendable: