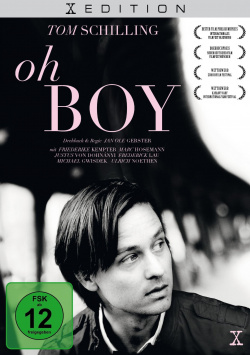 Film: The life of Niko (Tom Schilling) seems to have reached a turning point. His girlfriend left him, he quit his studies and his father (Ulrich Noethen) cut him off. His driver's license is also gone and nowhere in the city he seems to get a cup of normal coffee. And since in all this chaos he still does not really know where the journey is to go, he has no choice but to live and observe into the day in order to perhaps find his place in life. Whether his new neighbor (Justus von Dohnanyi), who lays down a real soul striptease in front of him at Buletten's, whom his wife has made a move in for Niko, or his old school friend Julika (Friederike Kempter), who hasn't quite mastered her psychological problems from the past as well as she herself believes, they all accompany Niko on his odyssey through the city, through this day and through his life. But whether the next morning really everything will be different and the enlightenment will come how he should go on in his life?

With "Oh Boy" Jan Ole Gerster presents a wonderful big city comedy, which not only reminds of Woody Allen's early work because of its black-and-white look and the musical background, but also because of the clever wordplay and the sometimes very dry humor in its best moments. Tom Schilling is simply wonderful as Niko, who is a bit of a ghost through the day and on his desperate search for a cup of coffee meets many even more weird and broken characters. On the one hand this is due to his very natural and relaxed-looking game, on the other hand to the wonderful dialogues Gerster wrote for him and the other characters.

Zwar can be recognized as something like a stringent plot, yet the movie seems rather episodic in a quite effective way. Thus, Niko can meet numerous characters in many different situations, which can be taken up again later, but this doesn't have to be inevitable. Thus, at the end there is no feeling that any plot strand has not been dissolved or that the film seems too overloaded. Even though the individual stations of Niko's Day work perfectly on their own and often seem rather incoherent, a closer look reveals how excellently the film is constructed. The individual pieces of the story are cleverly built on each other and many of the movie's best points are very carefully prepared, which is why they can work really well.

Besides very funny moments, such as Niko's visit to the set of a highly dramatic world war drama, there are also some quieter moments, especially in the last third. This is also the movie's only problem. The final "episode" between Niko and an older gentleman, wonderfully played by Michael Gwisek, is not only a bit too long, its melancholic tone also doesn't want to fit into the rather easy action that has dominated the film until then. Although this scene, like the rest of "Oh Boy", is a beautifully observed illustration of the bizarreness of real life. Nevertheless, she doesn't want to fit into the overall picture as harmoniously as she did in the previous scenes.

However, even if you are pulled down a bit after many wonderful moments and extremely good laughs at the end, "Oh Boy" leaves a very positive impression in the end. It's a very original, excellently written and very well played big city comedy that shows that even in Germany, sophisticated cinema can be presented not only with melancholy, but also with casual irony and clever wit. Absolutely worth seeing!

Extras: Besides an audio commentary by director Jan Ole Gerster and lead actor Tom Schilling, which is spoken in a noticeably relaxed atmosphere and contains some very interesting information about the shooting, the DVD also has some nice outtakes to seven scenes (approx. 9 min.) and first improvisation recordings by Tom Schilling and Marc Hosemann (ca. 4:35 min.), which were made just one year before the actual shooting. In addition there is a Making of of the film music (approx. 4:20 min.), where the musicians are shown how they accompany some scenes musically. This is not uninteresting for viewers who are taken with the jazzy music, but the information content of this extra is quite low.

Finally there is a casting tape by Friederike Kempter (ca. 3:20 min.), a distant scene with Dr. Motte (ca. 1:37 min.), which was spontaneously staged on his 50th birthday, and the trailer for the film. Gut!

Fazit: "Oh Boy" is a very original and charming big city comedy, which convinces with a wonderful script and a very good cast and can comfort you over small weaknesses. The DVD presents the movie in appealing picture and sound quality, plus some nice extras, so the bottom line is a more than deserved "recommendable"!