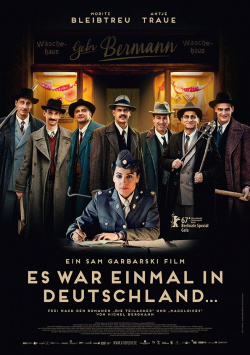 Once upon a time in Germany

Frankfurt am Main in 1946: The war is over and the people are trying to rebuild the country and heal the deep wounds left behind by the war. David Bermann (Moritz Bleibtreu) is one of the Jews who survived the horrors of the Nazi regime. Like so many others, he does not want to stay longer than necessary in Germany and emigrate to the USA. But for that he first needs a lot of money. In order to get there, the eloquent businessman joins forces with some other Jewish survivors to sell the Germans the finest underwear. The plan works out and soon the business flourishes. But in Bermann's past, there is a secret that now threatens to catch up with him. He has to undergo constant interrogations by the US officer Sara Simon (Antje Traue), in which a possible collaboration with the Nazis is to be uncovered. But the charmer Bermann doesn't want to be so easily convicted of a crime he didn't commit. Or is there some truth behind the allegations?

With "Es war einmal in Deutschland" director Sam Garbarski ("Irina Palm") dares to write the novels "Der Teilmacher" and "Machloikes" by Michel Bergmann. However, Garbarski interpreted the complex model very freely in order to make something completely his own out of it. He doesn't really seem to be able to decide whether the whole thing should be a comedy, a satire or a post-war drama. The movie has some very amusing moments, which can score with biting and subtle humor. Here, Moritz Bleibtreu, an eloquent businessman, is also in top form. Watching him twist towels and tablecloths at his customers or trying to pull his head out of the noose in interrogations with Sara Simon is a lot of fun.

However, just in the second half of the film the sound of the production changes too often and too drastically. Mixing comedy and drama can work very well in principle. But it just doesn't work out here. The individual scenes work very well on their own, but there is just one part in the story in which the almost blatant discrepancy between comedy and bitter drama doesn't fit together. After what's happening here, it's almost impossible to laugh again.

It's a pity that the staging seems somewhat undecided overall. Because "Es war einmal in Deutschland" can actually be completely convincing when it comes to actors, sets and history. But the feeling remains that Garbarski himself didn't really know where to go. The film is far from being bad. However, despite many successful aspects, it is unfortunately not really good either. And that's a real shame given the potential offered by the story and the actors. And so at the end it's only enough for one: with small restrictions worth seeing!

Kino Trailer zum Film "Once upon a time in Germany (Deutschland/Luxemburg/Belgien 2017)"
Loading the player ...