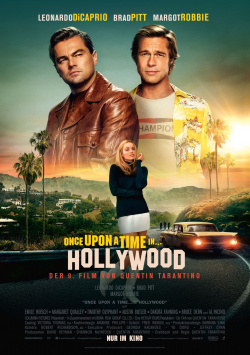 Once upon a time... in Hollywood

Hollywood in 1969: Rick Dalton (Leonardo DiCaprio) was once a big TV star. But he never really wanted to jump onto the big screen. And now, after the end of his own series, he is only hired as a villian in other shows, where he is then mightily blown away by their heroes. A sure sign that his career is going downhill. Although his long-time stunt-double Cliff Both (Brad Pitt) supports him in all situations, Rick is more and more eaten up by self-doubt. Both men are trying to survive in an industry that is changing rapidly, producing new stars like Sharon Tate (Margot Robbie)…

More does not have to be said about the content of Quentin Tarantino's "Once upon a time… in Hollywood". With his ninth film, the cult director makes a very big declaration of love to the golden age of Hollywood. The story is almost secondary. Tarantino really loses himself in the way he brought Hollywood back to life in the late 1960s with his attention to detail, a once again ingenious selection of music, and great camera work. He bows to the great masters, but doesn't spare any ironic side blows at the film industry either.

The film is carried by a great actor duo: Brad Pitt and especially Leonardo DiCaprio really deliver outstanding performances here, which combine with the dialogues, which Tarantino once again masterfully wrote, to a cinematic delicacy. The fact that very little happens over long stretches of the almost three-hour work and that people talk first and foremost would probably break the neck of every other film. Not like this. Here it works so well that you (almost) don't notice how fast 161 minutes can go by.

Add, there are some lengths. Thus, a scene that Rick Dalton observes while filming is a little stretched, so that the actual story almost falls into oblivion. No question about it, this sequence is brilliantly played and brilliantly written. But at some point you as a viewer have the feeling that you are suddenly in a completely different movie and that disturbs the narrative flow a bit. It's also a pity that the performances of some great supporting actors like Al Pacino or Kurt Russell are much too short in comparison. The same applies to the Sharon Tate played by Margot Robbie, who was always shown as the third main character in the trailers. In the film she plays an important role, but by no means as central as one might have expected after the trailers.

However, in the end the quite justified points of criticism recede completely into the background. Once upon a time… in Hollywood" is an exquisite entertainment cinema with great actors and a last act that can only be described as brilliant. Tarantino has shot a first-class blend of homage and fairy tale that is fun from the first to the last second. By Tarantion's standards astonishingly bloodless, but carried by familiar cult dialogues - and just because of the great actors: Absolutely worth seeing!!