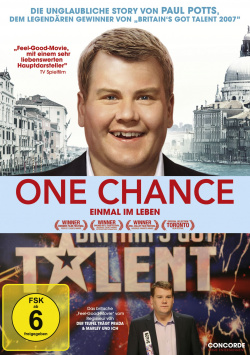 Film: If someone had told him a few years ago that his passion for opera would give him a world career, Paul (James Corden) probably wouldn't have really believed it. His father Roland's (Colm Meaney) constant teasing and his classmates' humiliations have reduced his self-confidence to a minimum over the years. But when the shy mobile phone salesman meets the enchanting Julz (Alexandra Roach) and she actually seems to be interested in him, Paul finally finds the courage to follow his big dream. He wants to sing operas himself and perform in front of the great Pavarotti. But after an initial sense of achievement, numerous defeats follow, which continue to destroy this dream. And so it looks like Paul will always be a simple mobile phone salesman despite his talent. But sometimes life writes quite unexpected success stories...

"One Chance - Einmal im Leben" tells the story behind Paul Potts' legendary appearance on the British version of "Supertalent", which also gave millions of people in Germany goose bumps from the Deutsche Telekom commercial. Director David Frankel ("The devil wears Prada") didn't conjure up a typical biopic from the book "One Chance - How the dream of my life came true". Rather, his film is a heartwarming love story and a comedy bubbling over with joie de vivre with a slightly dramatic impact. It's become a movie where you can laugh a lot, but where there are also some very touching goose bumps.

It's especially pleasant that lead actor James Corden doesn't turn Paul Potts into a joke figure or an overstyled, unapproachable superstar. Rather, it gives the singer a deeply warm humanity, which makes him extremely endearing and easily accessible to the audience. Together with Alexandra Roach he forms one of the most likeable pairs of canvases of recent times. Sure, the characters are a bit overdrawn, some moments a bit too clichéd and here and there there there is also too much pathos. But that doesn't change the fact that Frankel has staged a first-class feel-good movie that offers its viewers almost two hours of perfect escape from reality.

The only real criticism that can be made here is the fact that you can already see very clearly that James Corden only moves his mouth to the vocal parts recorded by Potts and doesn't really sing himself. This makes the scenes, which take place in Italy, seem very staged, which makes them lose some of their magic. However, this doesn't change the very positive overall impression of the movie very much. "One Chance - Once in a Life" is perhaps not a masterpiece, not a cinematic revelation and definitely not something you haven't seen very often. But when the familiar is so charmingly, life-affirming and heartwarming, as it is the case here, then it is difficult to be disturbed by the lack of originality. Because the smile and goose bumps you take with you are what counts in the end. And that's why for all lovers of small, charming love comedies as well as for fans of Paul Potts: Absolutely worth seeing!

Picture + sound: The technical implementation of the DVD is on a good level for a current cinema production. The image sharpness is good, shows slight weaknesses only in darker scenes, but can also convince in bright outdoor shots with the representation of smaller details. The colours are atmospheric and the scenes set in Italy in particular are bathed in an almost fairytale-like light. The tone is primarily dominated by the dialogues and can reveal its true quality especially in the musical moments. The DTS mix is a little more powerful and dynamic than the already good Dolby Digital 5.1 mix. Those who speak English should definitely choose the better original soundtrack. Good!

Extras: The only real weakness of this DVD is the bonus material. In addition to the trailer and program tips, this only consists of a 3-minute promo featurette in which producer Simon Cowell praises Paul Potts and the film about high clover.

Fazit: "One Chance - Einmal im Leben" is a wonderful feel-good film, which can please with sympathetic actors, a beautiful story as well as a successful mixture of comedy, romance and drama. The technically well realized DVD is not only for Paul Potts fans absolutely recommendable!