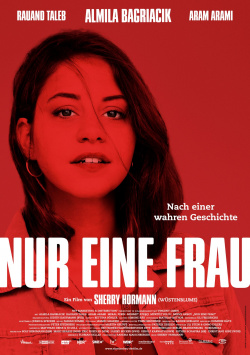 It was a crime that shook the whole of Germany in 2005: Hatun Aynur Sürücüs was shot dead on the street in Berlin. And this from her brother. This so-called honour killing caused a big outcry especially in the media. How can such a thing be possible in our society? The victim and the backgrounds that led to this act were increasingly pushed into the background. Sherry Hormann now wants to change that. In her drama "Nur eine Frau" she lets Aynur (Almila Bagriacik) tell her own story. Starting with a forced marriage with her cousin, her escape from her violent husband and her desire for self-determination - which did not correspond to the traditions of her family at all. When she is looking for her own apartment for herself and her little son, is studying and falls in love with a German, this is a clear sign for her brothers: Aynur has brought shame on the family and must die…

"Only one woman" is a stirring film that finds the right tone to tell this difficult story over long stretches. The beginning is still a little bumpy. When Aynur, as a narrator, accuses the viewers of not really being interested in her, for example, this already seems a bit generalizing. And the reproachful undertone at the remark that we wouldn't understand their culture and their language, that's why we're switching from Turkish to German now, sounds a bit inappropriate at first. But - and this has to be especially emphasized in this context - this irritatingly brashness, which seems to unload towards the audience, has a deeper background, which only becomes apparent in the course of the movie, when you get to know Aynur better and really understand what led to her murder.

Here Hormann's staging is a difficult one, but she masters it with a great deal of sovereignty: she tries to explain a culture to the audience without apologizing, but also not in order to demonize it in general. At the same time she also created the portrait of a really strong young woman who didn't want to settle for a life forced upon her by men who actually fought for something like happiness and independence - and had to pay a high price for it.

Yes, the film makes you angry. And yes, it makes you despair that there are people right among us who are so blinded by a completely misguided notion of honour that they are willing to kill a loved one. But it's also a film that makes it clear that it's wrong to condemn an entire culture for it. It is a small, personal story, but it has a great social significance and makes it clear: There are simply things that one must not conceal out of misunderstood tolerance. It's a pity, though, that the movie will probably only reach those who already know that. Intensively played and grippingly told and therefore very clearly: Worth seeing!