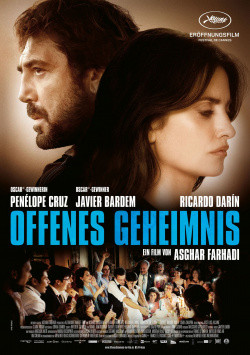 After many years Laura (Penélope Cruz) returns with her children from Buenos Aires to her Spanish home village for the wedding of her sister. Not only her family, but also her former friend Paco (Javier Bardem) are very happy about Laura's visit. And also her pretty teenage daughter Irena (Carla Campra) quickly finds her way into the small village. The atmosphere is cheerful and nothing stands in the way of a wonderful wedding. But then it comes to a tragic event on the wedding night that brings a sudden end to the harmonious hustle and bustle and brings dark secrets from the past back to the surface…

With "Offenes Geheimnis" Asghar Farhadi has staged a very atmospheric family drama that scores with very nice pictures and a great cast. At the beginning there is actually something like a familiar atmosphere, in which you feel very comfortable as a viewer, too. Beautiful landscape, cheerful people - that is simply contagious. Yet - and the filmmaker also succeeded in doing this very well - he subliminally intersperses a feeling of disaster, so that you soon suspect that the harmony at this place can't last.

What follows is exciting and stirring in its core. The actors, especially Penélope Cruz, deliver very strong performances, which leads to some pretty intense moments. However, Farhadi only manages to transfer this intensity to his staging to a limited extent. Every now and then he gets lost in long, very tough scenes, through which only the obvious is made clear anyway. This doesn't make the movie bad, but unfortunately a bit boring. And that's a damn shame about the story, which is so strong in itself.

"Open Secret" shows once again where the boundaries lie between (intentional) art cinema and (quite demanding) entertainment cinema. This can best be compared to the Oscar winner "In her eyes", in which Richardo Darín also played a leading role. This thriller also relied on slowness again and again, but concentrated much more on what made the story so exciting and effective. "Offenes Geheimnis", on the other hand, repeatedly loses sight of the central plot in the effort to make artistic feature-length cinema, so that the story, which could easily have been told in 90 minutes, was inflated to over 2 hours.

Whoever appreciates leisurely narrated, beautifully filmed and well played arthouse cinema will certainly find "Open Secret" to be a very strong drama. The film may also be absolutely worth seeing for this audience. But those who expect intense, stirring suspense cinema due to the story will be transported from sometimes very tenacious boredom to the realm of dreams. And for that you really don't have to leave any money at the box office. All in all, there is only one: Worth seeing with restrictions!