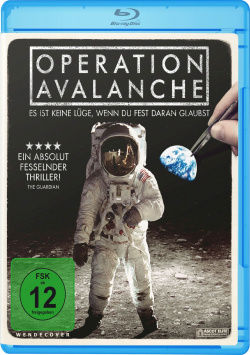 Film: Matt Johnson (Matt Johnson) and Owen Williams (Owen Williams) joined the CIA in the 1960s through the so-called "Bright Recruits" program, where they lead the AV team together with a cameraman. You will be charged with unspectacular missions such as reviewing filmmaker Stanley Kubrick. But Matt would much rather find out the alleged mole is at NASA, who passes on secrets to the Russians. With a crazy idea, he manages to convince his superiors to support his team with this assignment: they want to pose as a documentary crew who wants to shoot a film about the upcoming moon landing at NASA. The plan seems to work out until they overhear an explosive conversation: Apparently NASA is not yet ready to actually land on the moon. According to this information, Matt and the rest of the team are to be removed from the mission. But then the passionate film freak has an idea - an idea that could not only change history, but that could also put him and the others in great danger…

After his festival favourite "The Dirtes", who has dealt with the subject of bullying in schools, director Matt Johnson remains true to the mockumentary and found footage style even in "Operation Avalance". Even though this stylistic device has become worn out due to its too frequent use in the horror-subject, Johnson can still get some worth seeing and original sides out of it - even if at the end he falls for the usual weaknesses that these movies too often bring with them. First of all, the strengths: The idea of filming the preparations for the moon landing, disguised as a documentary crew at NASA, provides some really entertaining moments especially in the first third of the film.

And even if Johnson copies himself and his fellow actors into archive material, so that one gets the impression that they really visited Stanley Kubrick during the shooting of "2001 - Odyssey in Space" or that they would have been there at decisive moments in the NASA control center, the film, which towards the end turns into a conspiracy thriller, certainly has a high show and entertainment value. The relaxed tone of the first twenty minutes, which are almost comedic, is also a lot of fun.

In the end, however, the weaknesses of the staging are more significant. Too often, the staging falls into the usual found footage traps, in which the viewer wonders why filming continues in such situations - for example when one is shot at or makes a cruel discovery in the garage of an acquaintance. Moreover, as an actor Johnson is simply not convincing enough to convincingly portray the constantly growing paranoia.

Although: The clever play with the usual moon landing conspiracy theories and the ending make such weaknesses still forgivable. If you like entertaining conspiracy thrillers and aren't deterred by the found footage style, you should definitely take a look here. Worth seeing!

Picture + sound: Since the material of this Found Footage film is supposed to be from the 60s, it was edited accordingly. Blurriness, image gravel and soiling can be detected - but are also intentional. Therefore, the image quality can only be evaluated as to whether it is authentic. And there's a clear one: yes! The tone, on the other hand, seems a bit too powerful to actually originate from the 60s. The dialogues sound very understandable from the speakers and at a few points smaller sound effects are used, which make use of the surround range audibly. Good.

Extras: Beside the trailer and further program tips there is also an interview with Matt Johnson (ca. 14:20 min.) recorded exclusively for the German release.

>Fazit: "Operation Avalance" is an entertaining found footage thriller, which shows some weaknesses and illogical moments especially towards the finale, but overall can come up with an exciting and quite clever story and an atmospheric implementation. The audiovisual implementation is convincing and the look captures the 60s feeling well. The bonus material consists of an interview with the director, which provides some interesting information. Altogether there is a clear one for it: Recommendable!