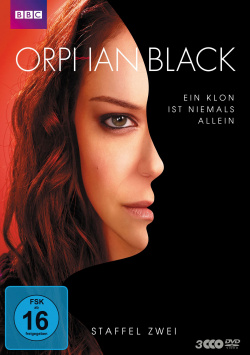 Contents: Sarah Manning (Tatiana Maslany), the result of a top secret clone experiment, has come dangerously close to solving the mystery of her true origin. Now her daughter Kira is kidnapped and her mysterious opponents are close on the heels of the young woman. Sarah is sure that her clone Rachel (Tatiana Maslany) and the mysterious "Dyad" organization are responsible for the disappearance of Kira. When she finds her daughter, she has to realize that the conspiracy is going on much further and more dangerous circles. Not only her life, but also that of all her helpers and other clones has long since been in great danger. Apart from her foster brother Felix (Jordan Gavaris), Sarah can't really trust anyone anymore. But in order to be able to assert herself against her powerful enemy, she needs help - and she could find it with the police officer Art (Kevin Hanchard), of all people, who has been investigating her since she pretended to be his partner Beth. But is that enough to save themselves and the other clones?

After the great success of the first season of "Orphan Black", which not only inspired critics but also the audience, the expectations of the second season were naturally high. It was clear to the makers that they would not only have to continue the story of the clone conspiracy consistently, but also expand it in such a way that there would be many moments of surprise in the second season as well, thus avoiding any form of monotony or repetition. And they did it very well. The new episodes are even more exciting and grippingly staged and the story is even more complex. In the very first episode, it becomes clear that the threat Sarah and the other clones are facing is far greater than previously thought. Based on this insight, the following episodes skilfully build up an ever more ramified web of lies, intrigues, murder and secrets, through which the addictive factor of the series is significantly increased.

Besides the storyline around Sarah, subplots about Cosima's mysterious illness and Alison, who was plagued by feelings of guilt after the murder of her neighbour, also ensure that the viewer remains captivated from beginning to end. Here it becomes clear again why "Orphan Black" works so well. Because the fact that leading actress Tatiana Maslany can give each of the clones she plays a personality of its own makes the series something very special from a purely acting point of view. The extreme contrast between the heroine Sarah and the ice-cold Rachel alone testifies to a great acting talent.

Luckily, apart from the numerous exciting and also more action-packed moments, there are also a few lighter, humorous scenes in the second season, which loosen up the action a bit. It is primarily Jordan Gavaris as Sarah's draw brother Felix who is responsible for this. However, the good hands that the makers have proven in the cast of the secondary characters do not only pay off with Gavaris. Also Maria Doyle Kennedy as Mrs S. or Evelyne Brochu as Cosima's friend Delphine are allowed to show new, strong facets of their skills in the second season.

"Orphan Black" has managed to save the high quality of the first season into the second year and sometimes even to increase it. This makes the Canadian-American production undoubtedly one of the best genre series that can currently be seen on TV. Let's hope that she now manages to rise from an insiders' tip to a real hit, so that Sarah Manning and the other clones remain a few more seasons. Therefore: Absolutely worth seeing!!!

Picture + sound: Even in the second season, the series is not only convincing in terms of content, but also in terms of picture and sound quality. The image is absolutely clean and pleasantly sharp, especially in the brighter moments. But even in darker scenes there are only minimal deductions in the detail display and in the contrast tuning. The sound is available in a lively Dolby Digital 5.1 mix, which transports the dialogues powerfully and well tuned to music, ambient noises and sound effects from the speakers. Good!

Extras: In contrast to the first box, the bonus material was significantly reduced. This time there is only a short making of the season (approx. 13:17 min.), as well as some program tips from the provider.

Fazit: After the hype about the first season, "Orphan Black" perfectly manages to meet the high expectations of the fans in the second year. The story continues consistently and has many surprises, new dangers and unexpected twists to offer. The mixture of thriller, mystery and SciFi is again carried by an outstanding Tatiana Maslany in the new episodes, who perfectly turns all the different clones into completely different characters. And so the impression is again confirmed that "Orphan Black" is an extremely original, exciting and highly entertaining series with a high addiction potential. Despite the clearly reduced bonus material there is therefore a clear one also for the second relay box: Absolutely recommendable!