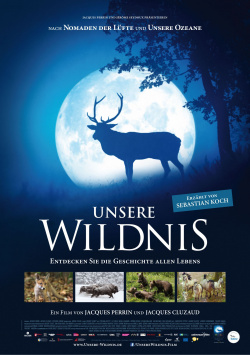 Our Forests, Our Moors, Our Oceans - There is hardly a region or habitat left that is not covered by its own documentation. Often these movies are fascinating to watch, but meanwhile they don't offer anything really new. The filmmakers Jacques Perrin and Jacques Cluzaud, who with films such as "Our Oceans" and "Nomads of the Skies" can certainly be described as pioneers of contemporary nature documentation, are trying with "Our Wilderness" to lend some new impetus to the genre, which has been somewhat overused in recent years, but which they don't really succeed in convincingly.

In their latest work, the two filmmakers take their audience on a journey through the centuries in our wilderness. They try to show how nature has changed due to the constantly growing influence of humans and how the habitat of many animals has been destroyed in large parts. The fascinating landscape and animal shots are interrupted again and again by small play scenes, which not only seem extremely posed, but also work through the usual clichés in an almost embarrassing way: the evil man kills animals and builds roads that destroy their habitat, but the curious children with their big eyes are still good and therefore our hope for the future. The two filmmakers couldn't have found an even bigger wooden hammer with which to beat their message onto the audience.

In addition, the film suggests that nature, which is shown at the beginning, no longer exists and that now only the barren forests, which can be seen at the end, are left. This is nonsense in that the scenes in which the past is to be shown were shot in forests and valleys that exist today. Of course, nature has changed. Of course, man has destroyed far too much of what makes our planet so unique and beautiful. But to want to convey this in such a striking way is almost annoying.

It would have been enough to let the pictures speak for themselves. The discrepancy between the regions in which nature is still almost untouched and the regions destroyed by industry and man's building mania is large and frightening enough that the message of the film could have been conveyed perfectly. So the film reveals that it doesn't really have much to offer apart from great shots. And as successful as they may be, you don't really get the feeling to see something groundbreaking new here. Therefore, if you expect a gripping documentation of nature, you will be annoyed by the pathos of the production in the long run. Those who generally like to indulge in fascinating shots of the beauty of our nature will certainly get their money's worth here as well. And therefore there is also a total: Worth seeing with some concessions!