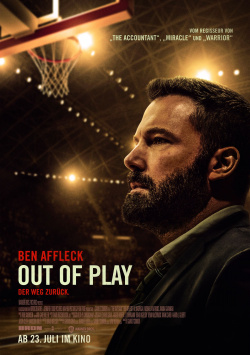 Out of Play - The way back

Once Jack Cunningham (Ben Affleck) was a talented basketball player who was on the verge of a glorious professional career. But those days are long gone. Now Jack is a man eaten up by grief and alcohol, who has long turned his back on the sport. But when he receives an offer to train the unsuccessful basketball team of his old university, his life could be back on track. In fact, he manages to lead the team to several victories. But his inner demons are always standing in his way on the path to personal salvation.

After the success of the thriller "The Accountant", director Gavin O'Connor and leading actor have now worked together again on the drama "Out of Play - The Way Back". The result is a stirring portrait of a man who has lost all support in life after a heavy blow of fate and also all motivation to change something about it. A challenge for Affleck, who is an alcoholic himself and has brought so much of his own demons into the role. It was important to him to portray the character of Jack as authentically as possible. That's what he did very well.

Basketball plays an important role in the story, but "Out of Play - The Way Back" is not a typical sports movie. Sure, there are some typical set pieces of this genre, which are also used here. But the team that slowly fights its way from the basement to the top with Jack's help is only a significant, but not central role in Jack's personal struggle. Therefore, the movie is also accessible for those viewers who have little to do with sports movies in general and basketball in particular. However, one should have a soft spot for melancholic dramas to appreciate the very good performances of all involved.

Denn "Out of Play - Der Weg zurück" carries a hopeful message, but is not necessarily a Feel-Good Movie. Jack's fight against his grief and his self-destructive addiction is sometimes a bit gruelling. Nevertheless, due to its moving story and the more than convincing portrayal of Ben Affleck, this film is: Absolutely worth watching!