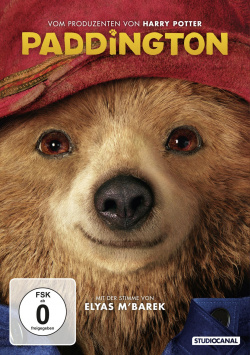 Film: Many years ago, a researcher in the "darkest Peru" discovered a rare bear species that not only behaves extremely humanely, but also has the ability to learn human language. He befriends a pair of bears and spends a lot of time with them. But what he has discovered remains a mystery to the rest of the world. This changes when, after a devastating earthquake, only the bear's grandmother and her young grandson are still alive. In order to offer the little one a reasonable life in safety, the old bear sends her grandson to London. But when he arrives in England many days and many jam jars later, nothing is as the researcher once described it. Finding a new family here would be extremely difficult. But then the bear meets the Browns, who take him in against the will of father Henry (Hugh Bonneville) and christen him Paddington. With the help of the Browns, Paddington wants to find the old researcher, hoping to find a permanent home with him. Until then, the bear causes a lot of chaos at the Browns, so that Henry would like to deport him immediately to an orphanage. But his wife (Sally Hawkins) and his two children convince him that they have to help Paddington. And time is of the essence, because a nasty taxidermist (Nicole Kindman) is targeting this rare bear and is doing everything she can to stuff it for her collection...

The stories about the bear Paddington, invented by the British writer Michael Bond, have been extremely popular for over five decades now, not only in Great Britain. In several books, a puppet series as well as an animated film series Paddington and the Browns already experienced several common adventures. It was only a matter of time before "Paddington" would make the leap onto the big screen. Under the direction of "Harry Potter" producer David Heyman and under the direction of Paul King, the lovely bear now awakens to a whole new life. But first trailers and clips let assume that the charm of the book presentation had to give way to child-fair chaos and rather flat Klamauk. But fortunately this impression only turns out to be bad marketing. Even though there are some rather flat, chaotic scenes like this, "Paddington" is one of the most endearing family movies of the year, with a lot of wonderful humor, a playful set and a really endearing title hero.

The visit at Antiquar Mr. Gruber (Jim Broadbent) or at the "Gilde der Geographen" clearly shows how much love for detail was worked with here. Here, as in the Natural History Museum, the film is a real feast for the eyes. It is simply a great pleasure to let the charm of the production and the many small ideas that make it so special roll over you and dive into the magical world of "Paddington". What is particularly nice is that the kitsch factor is kept within absolutely tolerable limits. Whenever the icing is applied a little too thick, director Paul King pulls the brakes. Then there's the use of loosening up humor, which can be attributed to a very affectionate horde of pigeons or the quirky neighbour of the Brown, played by the new "Doctor Who" Peter Capaldi. Just the perfect use of Lionel Richie's "Hello" paired with Capaldi's facial expression compensates for some rather silly gag.

The computer effects integrated into the excellent set design are also great. The fact that Paddington was only created on the computer is quickly forgotten. His facial expressions, and especially his eyes, have been breathed life into the bear, making it almost impossible for viewers not to immediately take the little bear with his red hat and duffle coat to heart - no matter how much chaos he may cause. The good work of Elyas M`Barek, who lends his voice to Paddington in the German version, should also be mentioned here. What is surely due to the current popularity of the "Fack Ju Göhte" actor proves to be a real stroke of luck, because M`Barek succeeds very well in translating the charm of the original into German.

"Paddington" may not be a perfect movie, but as warm family entertainment with a high fun factor this adaptation of the popular children's books is damn close. Therefore: For children from 6 years and all "Paddington" fans who are young at heart, this enchanting work is absolutely worth seeing!

Picture + Sound: The great colouring is particularly striking in the picture. This makes the already very nice, playful equipment even more inviting and the emotional warmth of the story is also made visually noticeable. The rest of the time, too, the realization of the picture can please with a good overall sharpness and harmonious contrasts. The sound is dominated by dialogues and music, with harmonious ambient noises and some nice sound effects providing some movement in the surround range. Good!

Extras: In this case the movie would have deserved more. Three mini featurettes about the way from the book to the screen (approx. 2:57 min.), about the figures (approx. 2:15 min.) and the visit of bear Paddington (approx. 1:48 min.) there is only a very short Promo-Making of (approx. 9:51 min.), as well as the trailer and further program tips. The bonus material is available completely in German language.

Fazit: "Paddington" is an extremely loving and playful adaptation of Michael Bond's popular books. Even though some gags have turned out to be a bit too silly, in the end an extremely positive overall impression prevails, which makes the story about the talking bear one of the most beautiful family films of recent months. The DVD is technically very well realized, only with the bonus material the cinema success would have deserved much more. Nevertheless the bottom line is quite clear: Absolutely recommendable!