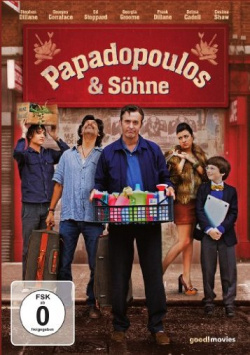 Film: Harry Papadopoulos (Stephen Dillane), an English businessman with Greek roots, actually has everything you could wish for. He owns a successful company for Greek specialities, lives with his three children Katie (Georgia Groome), James (Frank Dillane) and Theo (Thomas Underhill) in a dream villa, he has just been awarded European Entrepreneur of the Year and is on the verge of fulfilling a big dream with the construction of Papadopoulos Plaza. But there is one thing Harry lacks: joie de vivre. He seems to have completely lost it with the death of his wife. But so far he has at least been able to maintain the appearance of a happy life due to his prosperity. But then the economic crisis hits the entrepreneur with full force. Because suddenly Harry and his kids are standing on the street with empty bags. Only a run-down Fish & Chips shop, owned by Harry together with his brother Spiros (Georges Corraface), remains in the family. Together with the chaotic Spiros, the luxurious Papadopoulos children now find themselves in a not exactly noble district of London, where the Fish & Chips shop is supposed to be the new source of income for the family. But first of all the dump has to be repaired. Is Harry's dream finally over?

"Papadopoulos & Sons" is an amusing and refreshingly light discussion of the global financial crisis. The British-Greek director Marcus Markou devotes himself to the theme in a refreshingly ironic way, spiced with a humorous lightness that one would hardly have expected with this theme. Markou renounces any form of drama of consternation, but does not ridicule the whole thing. Rather, he finds a mixture of humour and seriousness that is harmonious over long stretches and well transported by the performer ensemble. Especially Stephen Dillane ("Game of Thrones", "The Hours") convinces as an initially emotionless, stiff Briton, who only slowly finds his long lost Greek joy of life again.

The play with cultural clichés and stereotypes wrestles a lot of humor from the story. Its core, the crisis as an opportunity for a second chance to make a complete fresh start, is filled with a certain seriousness that prevents the film from drifting into an all too shallow silliness. But despite all his good ambitions, his amusing scenes and his lovably drawn characters, "Papadopoulos & Söhne" also has to struggle with some problems that stand in the way of an unclouded positive overall impression.

So Markou always has obvious problems finding the right timing. In the last third, for example, there is a photomontage accompanied by music that takes far too long and would actually have been better suited to the credits. And also in other moments scenes are stretched too much, so that every good gag is completely lost in nothing. The potential for really good laughs is always there. However, Markou lets these chances pass over and over again and lets good scenes suffer from a much too leisurely pacing. And unfortunately it's also true here: just beside it is also over!

Despite this not insignificant flaw, "Papadopoulos & Söhne" is still a nice and entertaining comedy, which doesn't make its audience laugh, but smiles amusedly. It's a charming feel-good movie about the global financial crisis - and that in itself is a small feat. Anyone who appreciates sympathetic comedy with a bit of British dry humour and endearing characters can let "Papadopoulos & Söhne" show them how the crisis can turn fish & chips into a real delicacy. Worth seeing!

Picture + sound: The picture on the DVD is clean, has an authentic colouring and pleases with well balanced contrasts. The overall picture sharpness is on a good level, but here and there there there are some minor blurriness in darker scenes, which doesn't carry much negative weight, though. The sound is mixed rather cautiously. The dialogues are clear and easy to understand, every now and then the ambient noises also make sure that a little bit of life comes into the sound stage. Good!

Extras: The heart of the bonus material is a very good and extensive Making of (approx. 48 min.). The documentary, which is pleasantly promo-free, takes an entertaining and charming look at the making of the comedy. The worth seeing Making of is supplemented by a featurette, which introduces the main characters once again (approx. 5:20 min.). Finally there is a short film (approx. 11:01 min.) by director Marcus Markou with Ed Stoppard in the leading role. In contrast to the two other features, however, no subtitle options are available for the short film. Nevertheless, there is one clear thing here: Good!

Fazit: "Papadopoulos & Söhne" is a charming Feel Good comedy that takes care of the worldwide financial crisis in a pleasantly humorous way. The timing might be a bit better here and there, but overall the movie can convince with good actors and its british-dry humor. For those who like small social comedies with a feel-good character, this technically well-released DVD is a good choice! Recommended