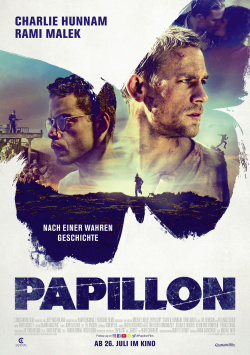 Paris 1931: The safecracker Henri "Papillon" Charrière (Charlie Hunnam) makes a fatal mistake when, after a raid, he withholds part of the loot from the mighty gangster boss Castili. In retaliation, he becomes the victim of a plot, at the end of which he is innocently accused of murder and sentenced. He must serve his sentence in the infamous St. Laurent penal colony in French Guiana. For Papillon, it's clear that he must escape from here. But for that he needs someone to finance his escape. He finds the ideal candidate in the inconspicuous counterfeiter Louis Dega (Rami Malek). Papillon offers him protection against payment. Guided by the iron will to leave the penal colony as quickly as possible, Papillon can survive physical and mental agony. But when the first escape attempt fails, he is punished for it in a way that will bring him to the limit of his resilience…

"Papillon" is, after the 1973 classic with Dustin Hoffman and Steve McQueen in the leading roles, the second cinema adaptation of Henri "Papillon" Charrière's autobiographical books. Compared to this movie, the new edition seems a bit too smooth and the characters too underdeveloped to achieve a similar emotional power. And that's exactly why it's especially unpleasant that the movie only comes to cinemas in a clearly shortened version. Around 15 minutes were removed for cinema exploitation, which will later be included again on DVD and Blu-ray. These are not violent scenes cut for a lower release. Rather, it's scenes that serve character development and give the story a little more substance.

And this is also necessary, because even in the uncut version, some moments seem a little rushed and the figures somewhat unfinished, especially in comparison to the 1973 version. The fact that the German distributor apparently doesn't trust its viewers to have enough patience for a film lasting more than two hours (or to pay the overlength surcharge), he didn't do himself a favour. For the story does not (only) live from the spectacular escape attempts, but from the characters and from what the penal colony makes of them.

Charlie Hunnam obviously tried to make Henri "Papillon" Charrière as authentic as possible. He even had himself imprisoned in solitary confinement for a week in order to be able to even begin to understand what Charrière had to endure for years. Nevertheless, his game is not always convincing. Especially in scenes in which Hunnam tries to transport the desperate struggle for survival purely through his facial expressions, it is revealed that Hunnam is not an actor who can credibly transport emotions. His almost stoic nature fit very well in "Sons of Anarchy" and also in "Pacific Rim" his reduced mine play didn't seem inappropriate. But here it just would have taken a bit more to really bind the audience to the character and let them get carried away by his fate.

"Papillon" is not a bad movie, no question. But whether in direct comparison with the original from 1973 or as an independent work, it simply has too many weaknesses to adequately transport the great power of history. A few great pictures and depressing-intensive moments, however, are still enough to certify the whole thing as "worth seeing" - whereby the shortened cinema version is only valid with restrictions!