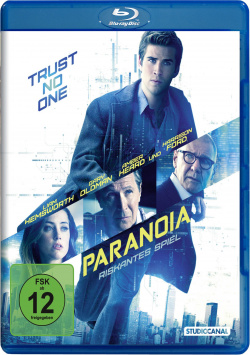 Content: Adam Cassidy (Liam Hemsworth) and his team have worked for many months on the new communication program, which their boss Nicolas Wyatt (Gary Oldman) rejects in only a few seconds. When Adam protests against the decision, the entire team is fired. Reason enough for Adam to celebrate unemployment with his fellow sufferers in a club at the expense of his former employer. When Wyatt finds out, he gives Adam a choice: either he goes to jail for embezzlement of company funds, or he gets himself smuggled in as a spy to Wyatt's arch-enemy Jock Goddard (Harrison Ford) to obtain information about a top secret new project. Since he needs money to take care of his father (Richard Dreyfuss), Adam reluctantly gets involved in the deal. But not only Goddard's visions, but also his co-worker Emma (Amber Heard), with whom he had a one-night stand in the fateful party night, make him doubt more and more that he made the right decision. When the FBI agent Gamble (Josh Holloway) becomes interested in him, the risky game really starts...

Based on the novel "Goldjunge" by Joseph Finder, Robert Luketic has staged a solid thriller about industrial espionage, corruption and greed for power. Yet "Paranoia - Risky Game" does not offer any great dramaturgical innovations. Character drawings and dialogues often seem to come straight from the drawing board, where they have been created strictly according to the rules of the genre manual. Also Liam Hemsworth ("The Tributes of Panem") sometimes seems a little overwhelmed with the leading role - especially in direct comparison with the Hollywood greats Luketic was able to win for this film. Nevertheless, the end result isn't as bad as the failure at the box office and the devastating reviews in the USA might suggest.

Due to the fact that even without big surprises the movie is never really boring, pleases with a stylish look and also offers some great supporting actors. Whether Richard Dreyfuss as Adam's stubborn father, Gary Oldman as an unscrupulous boss or Harrison Ford as a shady visionary, they all manage to defy the rather meager script and deliver worth seeing performances. And also the other supporting actors, from Amber Heard to "Lost"-Star Josh Holloway, leave a quite positive impression.

The currently very topical topic of constant surveillance could certainly have been much more. Films like "Staatsfeind Nr. 1" succeeded in this, although many clichés have been tried here as well. "Paranoia" could have taken more corners and edges as well as some real surprises. If Luketic had worked out the explosive nature of the topic and its threatening character better, the movie would surely have gained not only in tension but also in overall quality. So the whole thing is unfortunately a little lukewarm, but still entertaining. If you don't mind a certain predictability and are just looking for rock solid, well cast thriller entertainment, you shouldn't be put off by the many bad critiques and risk a glimpse at any rate. Because as such "Paranoia - Risky Game" is not a masterpiece, but still worth seeing!

Picture + Sound: Technically the Blu-ray leaves a very good impression. The picture is absolutely clean, the sharpness of the picture is also on a high level with the detail display and also the adjustment of contrasts and black values can convince. The sound is available in a very lively DTS-HD 5.1 MA mix, which is mainly determined by dialogues, but due to the music, ambient noises and smaller sound effects has an overall very good dynamic!

Fazit: "Paranoia - Risky Play" is an experienced thriller, which can compensate its dramaturgical weaknesses by the great cast and the technically successful staging. The movie doesn't offer any big surprises and gets lost in quite worn out clichés, moreover Liam Hemsworth seems a bit overwhelmed with the main role in some moments. Nevertheless, in the end the whole thing is enough for absolutely solid thriller entertainment, which presents itself on the Blu-ray in very good picture and sound quality. Recommended