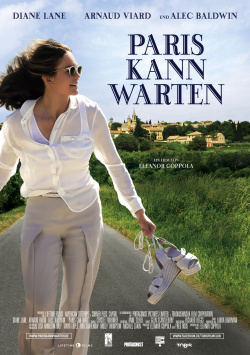 Anne (Diane Lane) was actually looking forward to spending a few quiet days with her husband, Hollywood producer Michael Lockwood (Alec Baldwin), in the south of France after the media hype in Cannes. But he is called to a problematic shoot in Budapest. Anne simply doesn't want to accompany him there, and so she agrees to let Jacques (Arnaud Viard), her husband's French business partner, drive her to Paris in his car. But a planned short tip turns into a trip lasting several days in which Jacques shows his companion the beauties and culinary delights of his country. Anne is a little irritated at first, but when she just lets herself go and enjoys the time, this also awakens unexpected feelings in her…

"Paris can wait" is the first feature film direction for Eleanor Coppola, the wife of legendary filmmaker Francis Ford Coppola ("The Godfather", "Apocalypse Now"). That she didn't bring a big action epic to the big screen at the age of 81 should come as no surprise. But a little more speed or a more elaborate story would have done her road trip through France a lot of good. That's not to say that "Paris can wait" is a bad movie. But he is far away because of the wonderful pictures and the still extremely charming Diane Lane. But to be honest, the whole thing could also go as a tourism video with a little bit of action.

The film is primarily about the images and the flowery, passionate descriptions of landscape and food by Jacques. And it works really well. As a viewer, you get a great desire to visit the places shown in the film yourself and would give a lot to swap places with Anne in order to refresh yourself with a man of pleasure like Jacques, with the wine and delicacies of the country. But unfortunately every wine glass that is led here to the mouth is deeper than the very flat dramaturgy. The whole thing is very, very nice to look at, but offers no surprises or dramaturgical highlights.

If you just want to spend 90 minutes on a short break in France, you can of course do not care. Because here he gets something really fine for the money. But those who expect more than just beautiful pictures could soon be overwhelmed by monotony and boredom. Either way, it is absolutely advisable to go to the cinema either with a full stomach or with a secure table reservation for shortly after the film. Because the film makes one thing in any case: Hunger! At the end of the day there is still some humor for the actors, the beautiful pictures and the here and there pleasantly light-footed humor: Worth seeing with small concessions!