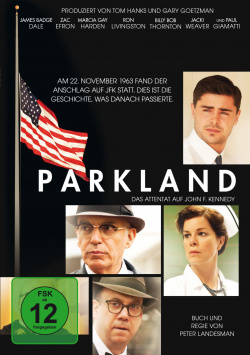 Contents: November 22, 1963: All of Dallas looks forward to the visit of John F. Kennedy, President of the United States. The security precautions are running at full speed, offices and shops are closing so that everyone can have a look at the president and his wife. But then the unbelievable happens: Two gunshots are fired at Kennedy, the president collapses in his limousine with life-threatening injuries. He is immediately taken to the Parkland Memorial Hospital, where the young doctor Jim (Zac Efron) desperately fights for the life of the most powerful man in the world - a fight he unfortunately loses. Witness statements, including the footage recorded by civilian Abraham Zapruder (Paul Giamatti), lead investigators from the secret service on the trail of the alleged assassin Lee Harvey Oswald (Jeremy Strong). But even his rapid seizure cannot prevent too many questions from remaining unanswered and a deep wound from being inflicted on the country, the healing of which continues to this day...

Fifty years after the assassination of John F. Kennedy, filmmaker Peter Landesman tries to approach this traumatic event in a different way in "Parkland". He places doctors, witnesses and investigators at the centre of an almost documentary production, in which he also repeatedly incorporates archive material such as excerpts from news broadcasts. Landesman was able to engage a first-class cast for his film, whereby smaller roles were also cast with familiar faces from film and television. While some of these actors can only be seen very briefly, James Badge Dale as the brother of the alleged assassin, Zac Efron as the young doctor who has to operate on the president and Paul Giamatti as the involuntary witness of the assassination leave a really strong impression.

An ensemble piece of this kind, which deals with some very eventful days on different levels of action, in less than ninety minutes, naturally has the consequence that some elements of the story remain somewhat superficial and the whole thing seems overloaded. This impression is reinforced by the sometimes very restless camera work, which conveys a certain authenticity and thus fits well to the archive material used. On the other hand, this is also a bit exhausting for the viewer, especially as it's already a bit difficult to keep track of the mass of acting characters. Towards the end Landesman reduces the pacing a bit, whereby it also becomes apparent how strong his film could have been in a more unagitated and detailed staging.

"Parkland" is a good film, but it should have been even better due to the high ambitions of the makers and the talent of the actors. Only then would he have been able to do justice to the great emotional power underlying the tragic events. However, even though this only succeeds to a limited extent, the drama is absolutely worth seeing due to the good ensemble and some very intense scenes alone and a worthwhile addition to Oliver Stone's "JFK". Recommended!

Picture + sound: The somewhat restless camera work and the look, which in places was trimmed to old, in which real archive shots were then inserted, reveal minor weaknesses in the visual realization of the film here and there, which could, however, also be regarded as a deliberately used stylistic device. The colour scheme is very harmonious and the overall image sharpness is at a very good level. The sound is a vibrant Dolby Digital 5.1 mix, but the mix of voices and ambient noise is particularly dynamic. Gut!

Extras: In addition to the trailer and nine minutes of uncommented B-Roll footage from the shooting, the bonus offer on the DVD includes 43 minutes of promo interviews with the makers and actors. Unfortunately there are no subtitles available for these interviews.

Fazit: "Parkland" is an ambitious, excellently cast drama in which the assassination attempt on John F. Kennedy is traced from the point of view of observers, doctors and investigators. It is an attempt to trace this event from a slightly different, very human perspective. However, due to the mass of protagonists and storylines, the relatively short running time of just under 90 minutes makes the whole thing seem a bit overloaded, which is why the emotional potential unfortunately can't unfold completely. Nevertheless there is a deserved one for the great actors alone, the good ambitions of the makers and some very intense scenes at the end: Recommendable!