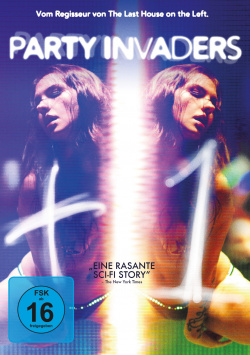 Film: Actually David (Rhys Wakefield) and Jill (Ashley Hinshaw) are a real dream couple. But through a stupid mix-up David presses his lips on another girl's lips, which Jill of course observes and immediately acknowledges with the separation from her boyfriend. A big party is his last chance to win Jill back. His buddy Teddy (Logan Miller) sees in the decadent buzz only the perfect opportunity to experience a hot adventure. Driven by the hope of reconciliation and wild teenage hormones, the boys don't even notice that a meteorite has hit the ground nearby, releasing a mysterious electrical voltage. Their effects will soon also be felt by the wildly partying party guests. Because just when David starts his last attempt to convince Jill of his feelings and Teddy enjoys himself in bed with the attractive Melanie (Natalie Hall), the electric voltage from space causes a leap in time with uncanny consequences: all of a sudden there are all party guests twice...

"Party Invaders" uses a really original basic idea with high entertainment potential. Director Dennis Iliadis, who became known to genre fans through his remake of the horror classic "Last House on the Left", has tried to cross the classic "body-eater" stuff with teen party movies like "Project X" or of course "American Pie" and spice the whole thing up with a little pinch of "And daily greets the groundhog". It's a wild mix that works extremely well in some moments, but doesn't really work in other scenes.

If Teddy can't believe his luck that he just had hot sex with a girl like Melanie, only to suddenly find himself in bed with her second version, it's as amusing as the way Alison (Suzanne Dengel) deals with her second version (played by Dengel's twin sister Colleen). The closer the leaps in time come to the present time, the more speed the staging takes up, which significantly increases the entertainment factor. In the first half of the movie, in which mainly the excessive partying with drinking, bikini-models and a sushi-girl determine the plot, the story is too much of a monotonous triviality in the long run. If there had been a bit less party here and a bit more Invaders instead, then "Party Invaders" could have been a thoroughly amusing fantasy fun. So the whole thing unfortunately lacks the last kick to leave a lasting impression despite the good basic idea.

However, even though Iliadis latest directing doesn't have what it takes to become a genre cult movie, he manages to get the audience to deal with the end of the movie even longer after the credits are over. At this point we don't want to reveal too much about the last third of the "Party Invaders". It should only be said that the dissolution leaves room for interpretation and that the end can be discussed for a long time. And that's really a lot of fun - as long as you don't succumb to the temptation to interpret too much into the movie.

Thus, "Party Invaders" is behind its limits and isn't a milestone of neither the teen party movie nor the fantasy horror movie. But as amusing entertainment for genre fans, who are not averse to the somewhat coarser teen humor, this unusual "body eater" variant is absolutely successful. And that's why the bottom line is a satisfied one: Worth seeing!

Picture + sound: The picture on the DVD has a good overall sharpness. Individual washed-out moments are deliberately used stylistic devices and are not a symptom of defects. The colour scheme is harmonious and the contrasts are also convincing. Only in the detail display there are small point deductions in the darker scenes here and there. The sound is primarily determined by the dialogues and the party soundtrack. This ensures a proper use of basses and the multichannel area is also used again and again. Good!

Extras: As a bonus there are short making of clips to the attack of "Sushi Girl" (ca. 1:08 min.) and to the fight in the pool house (ca. 2:52 min.), where the first clip takes a look at the rehearsals and the shoot, while the pool house fight is presented as a comparison between storyboard and finished scene. In addition, there are casting recordings (approx. 3:08 min.), special effects clips (approx. 1:07 min.) and photos of the make-up effects (approx. 0:59 min.). The trailer rounds off the very clear bonus offer.

Fazit: "Party Invaders" is a mixture of "Die Körperfresser kommen", the party movie "Project X" and various time loop movies. Mystery and SciFi meet here on rough "American Pie" humor. This may take some getting used to, but it's a lot of fun - especially since you can wonderfully rack your brains over the end. The DVD presents the film in good picture and sound quality, the extras are quite nice, but also quite negligible. Even if the film can't quite withstand the possibilities of the original initial idea and the party scenes seem a bit monotonous in the long run, there is a clear entertainment value for the quite high: Recommended!