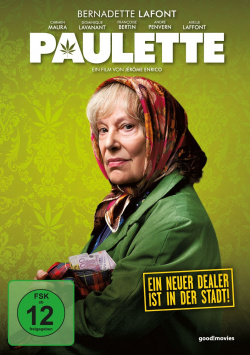 Film: Those were still times when Paulette (Bernadette Lafont) led a happy life with her husband and her little pastry shop. Now, at the age of 80, she has to keep her head above water with a mini pension in an extremely shady suburb of Paris. She has a very tense relationship with her daughter Agnes and only reluctantly takes care of her little grandson Leo. Because Paulette blames the foreigners first and foremost for her misery. Not only are they all snatching jobs and all criminal anyway. Now the African policeman Osman of all people has fished his way to her only daughter. Paulette knows that she has nothing more to expect from the world and that she must take her happiness into her own hands. And this is exactly what she decides to do when one day a package of marijuana falls into her lap by a lucky coincidence. From now on the rough pensioner improves her pension as a hashish dealer for the crook Vito. When, after an unfortunate collision with other dealers in the block, she has to stretch her remaining fabric, Paulette discovers her talent for baking truly intoxicating delicacies. And before she knows it, she has risen to become the drug queen of her neighbourhood - a career that of course can't be kept secret for long...

With "Paulette" director Jérome Enrico has made a very entertaining contribution to the discussion about unfortunately very common problems in big cities like poverty in old age, migration and drug crime. Without trivializing these problems, he manages to win them a humorous side that turns the film into a biting social satire in its best moments. When Paulette really gets her rage and her very blatant prejudices out of the way, no eye stays dry because of the blunt political incorrectness. Yet Paulette doesn't look like a brainless racist. Through the opening sequence, which reveals a glimpse into her former life, it becomes clear why she is so angry - and somewhere this anger has to unload.

Despite some rather gloomy moments Enrico manages perfectly that the viewer isn't pulled down by the underlying dreariness of his story. The love value of weird characters like the women's trio, who help Paulette bake her delicious trips, or even a little over-excited situation comedy always relax the action pleasantly. Here and there you get the feeling that the staging is overshooting the mark a little and the very amusing basic idea is watered down a little. But the bottom line is that the story inspired by a small article that Enrico read in the newspaper is a lot of fun.

So "Paulette" offers very charming and nice entertainment overall. For more the comedy unfortunately lacks the necessary bite in the decisive moments, which distinguishes the comedy just at the beginning. At the end, the social satire turns into a modern fairy tale, that makes you in a good mood, but especially after the wonderfully vicious beginning it's a bit too well-behaved. Nevertheless: anyone who likes French comedies that carry the heart in the right place and who perfectly understand how to convey their very good and important message amusingly and entertainingly, can definitely be recommended this dealing granny. With a deep bow to the great leading actress Bernadette Lafont, who unfortunately couldn't live to see the success of the film any longer, there is therefore a deserved one: Worth seeing!

Picture + Sound: In a small comedy like this, you shouldn't expect an audiovisual fireworks display due to the genre. Accordingly, the sound is also rather reserved and concentrates on transporting the dialogues powerfully out of the speakers. The picture is clean, has a harmonious color scheme, neat contrasts and a satisfactory overall sharpness. That doesn't really knock you off your feet, but there's nothing to complain about. Good!

Extras: The bonus offer begins with an optional subtitled audio commentary by director Jérome Enrico and his editor Antoine Vareille. It's quite a lively and interesting entertainment, which reveals some interesting details about the making of the movie. The DVD also has a good making of (approx. 26:19 min.) on board. There are also ten edited scenes, which can optionally be viewed with an audio commentary by the director (approx. 8:30 min. in total), as well as interviews with the main actress (approx. 9:12 min.) and the director (approx. 12:02 min.). Gut!

Fazit: "Paulette" is a very charming and nice comedy, which could have taken a bit more bite towards the end. But this small weakness is easily compensated by the unfortunately recently deceased leading actress Bernadette Lafont. A nice feel-good comedy that presents itself on the DVD in good picture and sound quality and also has some nice extras to offer. To be able to pronounce a "recommendable" for it, you really don't have to be stoned!