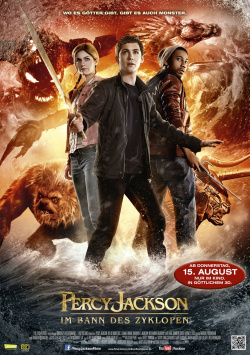 Percy Jackson - Under the spell of Cyclops

Slowly Percy Jackson (Logan Lerman) got used to being something very special as son of sea god Poseidon. In the safe environment of the half-blood camp, he tries to really become aware of his powers - the powers with which he once saved the world. But again and again he falls on his nose. Percy almost believes that his heroic deed was a one-time slip. But when the magical border to the camp threatens to be destroyed and the lives of all half-breed children are in danger, Percy can once again prove his divine courage. With his friends Annabeth (Alexandra Daddario) and Grover (Brandon T. Jackson), Percy sets off for the Sea of Monsters to find the Golden Fleece. Because only the fleece has enough power to restore the magical protection around the camp. But the search for the fleece quickly turns out to be more difficult and dangerous than initially assumed - and it doesn't help much that Percy's suddenly appearing half-brother, the somewhat stupid cyclop Tyson (Douglas Smith), has joined the rescue squad. But the biggest challenge is yet to come for Percy and his friends…

Although the filming of the first novel of the popular "Percy Jackson" series by Rick Riordan has not been the great success that the makers had hoped for, "Percy Jackson - Under the spell of Cyclops" is now a sequel in the cinemas after three years. After Part 1 was staged by "Harry Potter" director Chris Columbus in the hope of being able to build a worthy successor to the British student of magic, "Greg's Diary" director Thor Freudenthal must now try to kidnap cinema-goers into a magical world somewhere between reality and Greek mythology in the sequel.  With a somewhat reduced budget and without Pierce Brosnan, who was replaced by Anthony "Buffy" Head, the sequel primarily benefits from the fact that the first part didn't leave such a big impression on the audience, that their expectations would be enormously high now. Those who liked part 1 will expect nice fantasy entertainment for a young audience with some nice effects - no more, but also no less.

And this expectation is also met by "Percy Jackson - Im Bann des Zyklopen". The movie is nice to watch, has a convincing main actor in Logan Lerman and offers some nice special effects, whose 3D implementation works really well in most moments. The short, but very amusing performances of Stanley Tucci or Nathan Fillion ("Castle",  "Firefly") also contribute to the fact that the entertainment value of the fantasy adventure is always increased.

What the film suffers from is the fact that the makers have played it safe at every moment in order not to offend their target audience. There are no surprises, no real emotional depth. Whenever the impression is created that the makers have shown the courage to present something unexpected, the politically correct and family-suitable backdown follows shortly afterwards. This is a pity, as the movie seems to be a bit arbitrary and can't leave a lasting impression. And since the last scene clearly prepares a third part, it would have been nice to make the movie so stirring that you are really looking forward to another sequel. But this is more like thinking: It was quite nice, but I don't really care if it goes on like this.

Also Percy's half-brother, who confronts him completely unexpectedly, doesn't necessarily belong to the successful aspects of the movie. It is said to be funny and likeable, but could quickly lead to an annoyed twisting of the eyes in many people. There are scenes like the one in which Tyson with his loudly clattering rucksack gets unwanted attention or in which his exaggerated cordiality doesn't just get on Percy's nerves, in which it becomes clear that "Percy Jackson - Under the spell of Cyclops" hasn't become the entertaining fantasy adventure that could have been done with a more courageous and inappropriate staging. However, this way the movie at least offers fans of the first part some good entertainment, which however lacks the big wow-effect. Nice, but discouraged, pretty to look at, but without any form of lasting effect. If you don't expect more, you'll find entertaining popcorn fantasy with some pretty visual effects here. However, those who hoped that Percy Jackson would prove to be a worthy successor to "Harry Potter" at the second attempt will probably return disappointed from the journey to the Sea of Monsters. Therefore: with restrictions worth seeing!