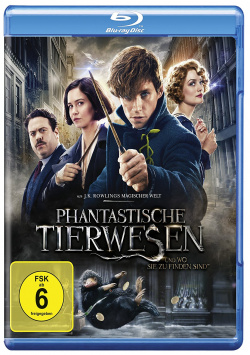 Fantastic animals and where to find them - Blu-ray

Film: Seventy years before a certain sorcerer pupil named Harry Potter had to fight against the evil Voldemort, the young sorcerer Newt Scamander (Eddie Redmayne) came to New York in the course of his exploration of magical creatures. But he couldn't have chosen a worse time, since the magical world here is in turmoil right now. A dark power haunts the city again and again, leaving traces that are hard to hide from the No-Majs - the American name for Muggles. It must not happen now in any case that the No-Majs learn of the existence of the magical world, which at the moment still exists peacefully next to theirs. But now of all times an unfortunate incident occurs, through which No-Maj Jacob Kowalski (Dan Fogler) comes into possession of Newt's suitcase full of fantastic animal creatures and accidentally releases some of them. Now the young magician, No-Maj and Tina Goldstein (Katherine Waterston), who is trying to get her old job as Auror back, have to do everything to catch the magical creatures again before they do any damage that could lead to an open confrontation between magicians and No-Majs…

With "Fantastic animal creatures and where to find them", successful author J.K. Rowling and director David Yates back to the world of "Harry Potter". However, without Harry, Hermione, Ron and Co., since the new story takes place in New York in 1926. There are some allusions to Hogwarts and Dumbledore and also Gellert Grindlewald, whose name fans of course already know, plays a not insignificant role. Besides, what Rowling designed here is a whole new world. It has its own charm, but there are some important elements missing that have made "Harry Potter" so popular and successful. On the one hand there are figures like Harry and his friends, who were especially important identification figures for young readers/viewers. Although Newt Scamander is extremely likeable, he will never be the hero that Harry was for children. He's too cranky and too much of a wizard for that, too. Harry was, despite all his abilities, above all a normal boy, who grew from history to history at his tasks. And the film noticeably lacks such a character.

What also has a negative effect is that the story is almost completely in the world of the Muggle - sorry - who plays No-Majs. This makes clear what an important and central role a magical place like Hogwarts plays for the world of "Harry Potter" with all its enchanting little details. The fact that there is no comparable place in the new history is literally a lack of a certain magic. Moreover, the overburdened finale can't really convince, as it reminds of superhero destruction orgies like "Batman v. Superman" rather than the "Harry Potter" movies. And that feels kind of inappropriate for a fan of the show.

So much for the points of criticism. These sound worse than they actually are. Even though "Fantastic animal creatures and where to find them" doesn't play in the same league as the "Harry Potter" movies, it's still a very entertaining, magical and visually impressive work, that lives on some very nice ideas, an imaginative set and very good actors. Eddie Redmayne is as a magic nerd with a soft spot for fantastic animal creatures perfectly cast and with Dan Fogler was found a more than sympathetic sidekick for him. Especially the budding romance between Jacob and Tina's sister Queenie (Alison Sudol) is an enormously charming part of the movie, which gives him exactly the soul that the CGI overkill lacks in the finale.

There is a lot of humor, especially regarding the sometimes very cute, sometimes a bit crazy magical creatures. This is quite child-friendly, which you can't necessarily say about the rest of the movie, though. The release from 6 years is not really appropriate in view of some very dark moments. For children under 10 years the film is absolutely not to be recommended. Otherwise, however, the whole thing has become a really thrilling fantasy adventure for young and old, which represents a promising start into a new series (a total of five movies are planned). If in the next part you dive even deeper into the magical world and use less unnecessary CGI-action, nothing stands in the way of the big success anymore. Therefore - in spite of some weaknesses - it is quite clear: Absolutely worth seeing!

Picture + sound: The audiovisual realisation of the film for Blu-ray can be convincing in almost every respect. Even in the 2D version, the image has a pleasant depth and excellent sharpness of detail. The atmospheric colour mixture also supports the very positive overall impression, which is not disturbed by blurring or other weaknesses even in the darker moments. The powerful sound is available in an extremely lively Dolby Atmos mix, which makes it crack in almost every second with small or big sound effects on all channels. Truly magical and: Very good!

Extras: The bonus material leaves a somewhat ambivalent impression. Although it provides a good overview of the production, it consists of too many too short features that only scratch the surface. We start with "Before Harry Potter: A new era of magic begins" (15:21 min.), an introductory short documentary about the way to this new chapter in the magical universe by J.K. Rowling. Five character featurettes introduce Newt Scamander (ca. 4:14 min.), the Goldstein sisters (ca. 5:04 min.), Jacob (ca. 4:42 min.), the new Salemer (ca. 4:42 min.), as well as the president and the Auror (ca. 5:37 min.). The featurettes about the creatures are very similar. After a general short docu about fantastic animal creatures (approx. 4:18 min.), Bowtruckle (approx. 2:36 min.), Demiguise (approx. 2:20 min.), Erumpent (approx. 3:42 min.), Niftler (approx. 2:29 min.), Occamy (approx. 3:09 min.) and the Thunderbird (approx. 2:25 min.), the focus here is on the fantastic animal creatures (approx. 4:18 min.).

We continue with Featurettes about the design. Here, too, there is first an overview of the design of the world of film (approx. 5:54 min.), followed by more detailed looks at the design of New York City (approx. 7:25 min.), the MACUSA (approx. 7:07 min.), Newts magic suitcase (approx. 4:59 min.), Shaws banquet (approx. 4:29 min.), as well as the magic club "Zum blinden Schwein" (approx. 4:39 min.). In addition to all these features, the Blu-ray still offers 11 unused scenes. It is very positive that the effects have largely been completed. There are some quite nice and worth seeing moments to discover. For example, you get to know Jacob's ex-fiancee and see even more of the world in Newt's suitcase.

Fazit: "Fantastic animal creatures and where to find them" may not have the magical charm of the "Harry Potter" movies. Yet, despite some weaknesses, the fantasy adventure is still a good starting shot for a new movie series, which is guaranteed to hold some surprises in store. The 2D Blu-ray presents the film in very good picture and sound quality. The bonus material is worth seeing, but also a little bit superficial. Altogether there is a deserved one for the disc: Absolutely recommendable!