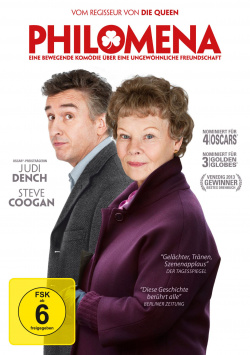 Film: When the young Philomena Lee (Sophie Kennedy Clark) gets pregnant in the strictly Catholic Ireland of the 1950s, this is an unforgivable sin for her family. The girl enters a monastery where she gives birth to her son and has to give him up for adoption some time later. Her faith and shame keep Philomena silent about this experience for many years. Philomena (Judi Dench) only wants to break this silence at the age of almost 70 and start looking for her son. The disgraced reporter Martin Sixsmith (Steve Coogan) is supposed to help her in her search and tell her story to the world. At first, Martin isn't very enthusiastic about working on such a fate story. But the more time he spends with Philomena and the more he learns about her life story, the more his shield of arrogance and cynicism breaks open. The search leads the unequal team of two to America, where Martin discovers an outrageous scandal...

"Philomena" is based on the novel "The Lost Child of Philomena Lee" by Martin Sixsmith. Steve Coogan and Jeff Pope have transformed this into a wonderful script, which director Stephen Frears ("The Queen") has translated both movingly and comically. With two great main actors and a lot of dry humour Frears manages perfectly that the rather sad story never degenerates into an overly sentimental Schmonzette. Rather, he succeeds in making the characters grow so close to the audience's heart that they don't have to be manipulated by the music or overblown emotions to the point of being really touched by Philomena's story.

Judi Dench plays the pious elderly lady with unbelievable charm and a lovable wink of the eye, which quickly enchants the audience. You just have to like her Philomena, which also makes it believable why a disillusioned cynic like Martin suddenly lets herself be softened by her. Steve Coogan, who is primarily known as a comedian, gives the once so successful journalist a wonderful arrogance that doesn't really make him likeable at the beginning, but doesn't completely hide his good points. It quickly becomes clear that Martin has built a protective wall of cynicism and arrogance around himself through his professional setback, which Philomena can gradually tear down. Watching how a kind of respectful friendship develops between the two very unequal people is a lot of fun and at the same time also a great emotional cinema.

Because when the fate of the young Philomena is shown in flashbacks, there are several moments of goose bumps in which viewers who are a little closer to the water can shed some tears. What she and Martin find out in America about her son and other children is sad and also makes a little angry. Nevertheless, the film never loses its refreshing lightness and its consistently positive mood. Frears proves with the help of his actors and the Oscar-nominated screenplay that even serious topics can be told in an extremely entertaining way and that they don't necessarily have to degenerate into a difficult shock cinema. Many German filmmakers in particular could take this as an example.

"Philomena" manages the difficult balancing act between comedy and drama, offers great acting cinema and heartfelt entertainment and releases the viewer with a tear in his eye and a broad smile on his face. It's a simply beautiful movie that lovers of the more demanding British entertainment cinema shouldn't miss. Absolutely worth seeing!

Picture + sound: The audiovisual realisation of the film is on a good level, whereby the sound remains very reserved due to the genre. In some moments the Dolby Digital 5.1 mix is pleasantly lively, but over long distances the dialogues and general calm dominate the action. The picture of the DVD is absolutely clean and pleases with warm colors and a good overall sharpness, which doesn't disappoint in the detail display either. Good!

Extras: As a bonus, the DVD has a very interesting commentary by lead actor and screenwriter Steve Coogan and his co-author Jeff Pope. The conversation between the two men is interesting and often amusing. Especially Coogan's dry humor makes this optionally subtitled commentary absolutely worth listening to.

Besides the audio commentary there is also a Making of, which deals with the true background as well as with the shooting and the actors (ca. 24:06 min.). In addition there is a conversation with Judi Dench (ca. 8:34 min.), a clip about the real Philomena (ca. 2:42 min.), as well as a worth seeing question and answer session with Steve Coogan (ca. 23:19 min.), which was recorded in Los Angeles in December 2013. Gut!

Fazit: "Philomena" is a wonderful film, which skilfully manages the difficult balancing act between comedy and drama and at the same time offers great acting cinema and heartfelt entertainment. A nice story that lovers of the somewhat more demanding British entertainment cinema shouldn't miss, especially as the technically well realized DVD also has some extras worth seeing and hearing. absolutely recommended!