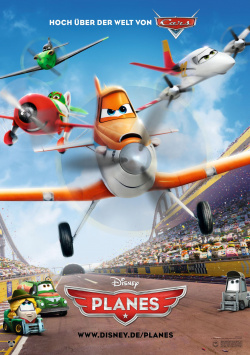 After the makers of Pixar's animated film have kidnapped us twice into the turbulent world of "Cars", Disney now continues the story high above the clouds. In "Planes" the simple spray plane Dusty dreams of being able to take part in the legendary "Wings around the Globe" race. His latent fear of heights and the fact that, as a single propeller aircraft, he is not exactly suitable for such a competition do not prevent him from wanting to turn his dream into reality. With a lot of ambition and the help of his friends Dottie and Chug, Dusty manages the impossible: he qualifies for the race. But against professionals like the Ripslinger, who subscribes to the prize, the small spray plane simply can't survive. He urgently needs the professional help  of the old naval pilot Skipper - who, however, is not enthusiastic about the idea of helping a foolhardy dreamer like Dusty. But when he is finally convinced that Dusty deserves his help, this is only the beginning of a great adventure that will take the little machine around the world…

In fact, "Planes" was not designed for cinema exploitation and should only be released on DVD and Blu-Ray. But in the course of the production one obviously saw so much potential in the "Cars" spin-off that the story about Dusty and his friends made it to the big screen after all. Little "Cars" and airplane fans will be happy, because the film is very child-friendly in terms of animation, suspense and humor. A bit older cartoon lovers will soon notice that the production lacks the typical Pixar stamp and that Disney's takeover of the rudder has made the whole thing a little bit unkind and unkind.

The animations also lack the finesse, which could still be clearly seen in the big brother "Cars", due to the much smaller budget. Sure, the whole thing is nice to look at and also has some pretty cute and funny ideas to offer. But where most Pixar and many Disney films offer entertainment for the whole family, only children really get their money's worth with "Planes". The story is too little surprising, the characters are too one-dimensional despite the nice 3D effects and the gags are served too harmlessly, which make every form of bite missing.

Although the makers have made a lot of technical effort to present the most spectacular flight sequences possible, it has to be noted again and again that the film is only a cheaply produced clone in the wake of the success of "Cars", which lacks its own soul. Nevertheless, "Planes" as simple animated film entertainment for children between the ages of 5 and 8 is quite successful. The planes and cars are nice and appealingly animated and Dusty is a lovely hero with whom the little ones will love to have a fever. And secondary characters, like the deliciously spoken Franz Fliegenhosen by Oliver Kalkofe, provide after all sorts of tension-loaded scenes again and again for cheering up laughter.

Who measures "Planes" at the adventures of Lightning McQueen and his friends or expects more, than a harmless fun for a young public, that will have with security only little joy at the speaking airplanes. But if you still need a child seat to see the screen in the cinema or if you can develop a childlike joy for very simply knitted animated films, you can confidently swing into the airy heights of the world of "Planes" next to Dusty and then leave the cinema in a guaranteed good mood. And for just such viewers  still applies: Worth seeing!