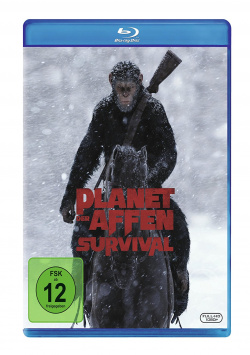 Planet of the Apes: Survival - Blu-ray

Film: It has been 15 years since a scientific experiment got completely out of hand, with the result that a large part of mankind was wiped out by a virus and the monkeys became increasingly intelligent. A peaceful coexistence between the surviving humans and the monkeys was what their leader Caesar (Andy Serkis) wanted to achieve. But for the monkey Koba there was only one thing: revenge. And so he caused a bloody conflict between the primates and the humans. The still existing armed forces of the US Army, led by a highly decorated Colonel (Woody Harrelson), have started to hunt the monkeys in order to finally destroy them and thus secure the continued existence of mankind. And Caesar wants to do everything he can to keep his monkeys safe. But now is the time to stop hiding from people. The decisive battle for the Planet of the Apes has begun…

The film should not be as good as "Planet of the Apes: Survival" is. After all, it's the second sequel to a prequel that itself was much better than critics and fans of the original had expected. But most of them were completely surprised when part 2 of this new trilogy was able to outdo its predecessor in quality. As a rule, continuations are rarely better than first parts. However, the fact that the third part is able to make a joke of it and is really superior to its two predecessors in every respect, is something you really don't experience too often in Hollywood. But Matt Reeves did it very impressively.

He tells the story that began in 2011 with "Planet of the Apes: Prevolution" was started, consistently ending. His second "Monkey" movie is dark, gripping, exciting and at the same time extremely entertaining. The biggest compliment you can pay the director is that you quickly forget that most of the characters you see in the movie were created on the computer. The effects are breathtakingly good, but they never come to the fore. And they don't mask the great performance of the actors who gave the monkeys in motion capture suits their movements and facial expressions. First and foremost Andy Serkis, who is simply great as Caesar. Even if you don't see him strictly speaking, every movement Caesar makes, every twitch of the corner of his mouth, every flaming expression of anger in his eyes is an expression of the great skill of Andy Serkis. There are many moments in this movie when you wish the Oscar Academy would finally honor the achievements of those who bring such motion capture characters to life.

The story approaches more and more the events known from the 1968 film with Charlton Heston. However, the timeline is not entirely correct, after all, in the new films only 15 years have passed since the outbreak of the epidemic and the battle for the planet, while in the original several thousand years have passed (more precisely, astronaut Taylor and his crew landed in 3978). Given the course of history of "Planet of the Apes: Survival," such a great leap in time in a possible sequel would make little sense. On the other hand, in Planet of the Apes: Prevolution" directly refers to the launch of the spaceship from the 68 film, which is why it can be assumed that the two timelines will meet at some point.

However, this is - in the truest sense of the word - music of the future. So back to Planet of the Apes: Survival. Since there hardly seem to be any people left on earth, they only play a minor role in the movie. Only Woody Harrelson is worth mentioning, who put on his mad colonel in the best "Apocalypse Now" manner. This is totally oversubscribed in places, but still works really well. This can also be said about many other aspects of the movie. Although on closer inspection there are some very big holes in the logic (yes, I question the logic in a movie about talking monkeys!) and at the end maybe it's a bit too thick, all these justified criticisms don't carry much weight at the end. Because "Planet of the Apes: Survival" is simply a very good movie, which serves popcorn entertainment with astonishing depth and shows that apes are somehow the better people. A worthy and almost perfect conclusion for this (first) new "Planet of the Apes" trilogy and therefore also: Absolutely worth seeing!

image + sound: The image pleases with a high sharpness of detail and a very atmospheric coloration. A good picture depth and the good coordination of the contrasts underline the very positive overall impression. There is hardly any reason to complain about the sound either. The powerful 5.1 DTS Mix makes the action sequences crack in the multi-channel area. But also smaller sound effects, the soundtrack and the dialogues are very well implemented.

Extras: The bonus package laced up for the Blu-ray starts with an interesting audio commentary by director matt Reeves, optionally with German subtitles. Reeves has some interesting details to tell about the making of the movie, which is why the commentary is a good addition to the other bonus material. Besides 10 dropped scenes (with optional commentary) without finished effects (ca. 23:03 min.) this has a good making of (ca. 29:38 min.) and a review of Caesar's story (ca. 12:40 min.) to offer.

Further short documentaries then deal with the visual effects (approx. 10:36 min.) and the film music (approx. 6:20 min.). Then a look is taken at the entire planet of the monkey series (approx. 20:15 min.), as well as at the allusions in the new trilogy to the old films (approx. 7:48 min.). A concept gallery and the trailer round off the good additional offer.

Fazit: "Planet of the Apes: Survival" is perfect popcorn entertainment with amazing depth. A successful conclusion of this trilogy, which presents itself on Blu-ray in very good picture and sound quality. The bonus material is informative and worth seeing and not only deals with the movie, but also with the complete franchise. absolutely recommended!