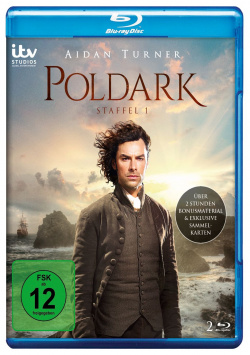 Film: In 1783 Ross Poldark (Aiden Turner), believed dead, returns from the American War of Independence to his homeland Cornwall. But during his absence everything seems to have changed here - and not for the better: His father is dead, the family mine is run down and highly indebted. And as if that weren't bad enough already, his great love Elizabeth (Heida Reed) will marry his cousin in a few weeks. These are all reasons to go straight back to the far end. But Ross decides to stay in Cornwall. He keeps his father's servants and also hires the young Demelza (Eleanor Tomlinson), whom he rescues from the clutches of her violent, alcoholic father. With all his strength and iron will, Ross rebuilds the copper mine and seems to be on the road to success again. But many conflicts in the village community, intrigues and the unfulfilled love for Elizabeth make sure that Ross Poldark simply can't calm down…

This isn't the first time this material has been filmed. Already in 1975 and 1996 Winston Graham's "Poldark" novels were adapted for British television. The first season of this new British-American co-production is based on the first two of a total of twelve "Poldark" novels. With "Hobbit"-Star Aidan Turner the perfect successor for the original-Poldark Robin Ellis was found, which can also be seen in a small supporting role in the remake. Grandiose landscape shots and the grippingly told story make sure that this film version of the popular books has also become an absolute hit.

No wonder, then, that the series has become an absolute ratings hit for BBC One. An average of 8 million spectators followed the first season spellbound, which was followed in 2016 by an equally successful second season. At the BAFTAS 2016, the British Oscar counterpart, there was also the Audience Award, followed by numerous other awards. The reason for the success is really not difficult to discern. This "Poldark" version is simply an excellently produced historical drama, which not only has a lot to offer for the eye with landscapes, equipment and costumes (and - this must be admitted without envy - for the ladies also with the main actor), but also tells its story in an extremely stirring way.

Although the whole thing takes place in a different time, which automatically creates a certain demarcation, you can easily find access to the characters and get excited about their fate. It is hoped that Ross will be able to choose between Elizabeth and Demelza, that his mine will bring in money again, and that he will be able to successfully overcome all obstacles that stand in his way. The fact that this doesn't always seem to be the case makes the series all the more exciting and especially the love story all the more tragic.

Those who have a weakness for wonderfully filmed and well played historical dramas should not miss this first season. It's simply a lot of fun to dive into this time and finally follow a really interesting hero with depth in his adventures. Absolutely recommended!  &nbspsp;

Picture + Sound: Cornwall's fascinating landscape shots come into their own on the Blu-ray due to the harmonious color scheme, the neat image depth and the very good overall sharpness. But the image quality is also convincing for darker interior shots. The sound is available in a DTS-HD Master Audio 2.0 mix, which primarily transports the dialogues powerfully from the home cinema boxes. But also ambient noises like the noise of the sea or smaller sound effects provide an atmospheric sound backdrop. This is absolutely convincing for a current TV production. Good.

Extras: The first Blu-ray features a very witty and informative audio commentary on the first episode (without subtitles) with Aiden Turner, other actors, the scriptwriter and two producers of the series as well as three short documentaries about the character Ross Poldark (ca. 7:36 min.).), about the shooting (ca. 6:27 min.), as well as about the women in the life of Ross Poldark (ca. 9:38 min.) The second disc has to offer an absolutely worth seeing documentary (ca. 56:05 min.), which not only deals with the shooting, but also with the book template and the historical background. German subtitles are available for the video extras.

Fazit: "Poldark" is a very well played, well filmed and thrillingly told historical drama, which is carried by a charismatic leading actor, wonderful landscape shots and a gripping story. The first season of the British ratings hit presents itself on two Blu-rays in good picture and sound quality and also has some good extras to offer. This is enough for a more than satisfied: Absolutely recommended!