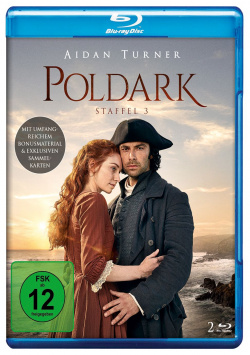 Film: After the affair with his once great love Elizabeth (Heida Reed), Ross Poldark (Aiden Turner) managed to forgive him for his wife Demelza (Eleanor Tomlinson). But now Elizabeth has a child and the question is: Who is the father? Is it her husband George Warleggan, or is it Ross? He doesn't want to risk his luck and decides that it's time once and for all for the Poldark and Warleggan families to go their separate ways. The plan is good, but he stands on shaky legs, which becomes clear when Demelza's brothers appear and Drake (Harry Richardson) falls in love with Morwenna (Ellise Chappell), the governess of Elizabeth's son Geoffrey Charles (Harry Marcus).

The newlyweds Caroline (Gabriella Wilde) and Dwight (Luke Norris) are not lucky either: Immediately after the wedding ceremony he has to go back to war with France, where he is captured. Ross wants to do everything he can to free his boyfriend - but puts his marriage at risk, because a new man enters Demelza's life, giving her the attention she so longed for from Ross…

The third season of the successful new adaptation of Winston Graham's "Poldark" novels actually offers everything that big series entertainment needs: Beautiful landscapes, attractive - but also acting convincing - actors, a lot of romance, drama and adventure. Even though the stories are often very conventional, not to say clichéd, the series works really well due to its excellent staging. So it is hardly surprising that it is still a hit in the UK in its third year and has already won a number of important prizes.

Although Ross and Demelza are the center of attention, it's no longer just the two of them. Also the storylines of other characters like Drake and Morwenna or Dwight and Caroline are well worked out. It's Dwight's fate that makes this season so exciting and gives you some goose bumps. All in all, the viewer is taken on an emotional roller coaster ride. If you are happy for Ross and Demelza that they could apparently save their love, then they are already put obstacles in their way again. As soon as Caroline and Dwight get married, they get separated again. Whenever someone finds his happiness, the viewer is prepared for the fact that fate shows its especially evil face again. But that's exactly what makes this series so appealing.

"Poldark" is also a feast for the eyes in season 3, and it's gripping, moving and extremely entertaining. So if you like powerful costume dramas with a lot of heartache, you've come to the right place. And for this there is also a clear commitment for the new consequences: Absolutely worth seeing!

Picture + Sound: Cornwall's stunning landscape shots are shown off to their best advantage on the Blu-ray thanks to their harmonious colouring, good image depth and very good overall sharpness. But the image quality is also convincing for darker interior shots. The sound is available in a DTS-HD Master Audio 2.0 mix, which primarily transports the dialogues powerfully from the home cinema boxes. But also ambient noises like the noise of the sea or smaller sound effects provide an atmospheric sound backdrop. This is absolutely convincing for a current TV production. Good.

Extras: Besides an audio commentary on the fifth episode on Disc 1, there are other nice extras to see on the second disc. In addition to another audio commentary there are some interviews with the actors (ca. 29:26 min.), a look behind the scenes (ca. 8:16 min.), three short features about the great romances of this season (ca. 9:20 min.) and another Making of (ca. 6:56 min.). The video extras consist of several short contributions, which are a bit promo-heavy, but also offer some worth seeing moments for fans. The audio commentaries are very lively and informative, but require a good command of English, as there are unfortunately no subtitles for them.

Fazit: "Poldark" proves again in season 3 why this series is so popular: great landscapes, lots of romance, intrigues and adventures - and of course many good-looking actors. What more could you ask for? The thrilling episodes of this third season present themselves on Blu-ray in very good picture and sound quality. In addition there are a few extras worth seeing and three postcards as a nice goodie. All in all a clear one: Recommended!