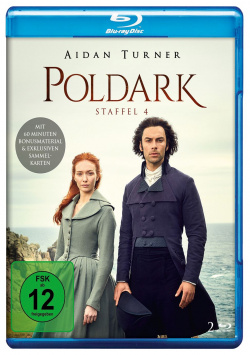 Contents: 1796 - Ross Poldark (Aiden Turner) and Demelza (Eleanor Tomlinson) still managed to save their difficult relationship. But then Ross has to make a decision that will put her love to the test again. It has become clear to him that he can only save Cornwall and the people he cares about from the machinations of George Warleggan (Jack Farthing) if he himself goes into politics and pulls the strings from there. It is not easy for the former rebel to go down this road, especially since he has to move to London after winning the election to the parliament. But of course it is not the only challenge that Poldark has to face…

The fourth season of the successful new adaptation of Winston Graham's "Poldark" novels faces a difficult task. After three convincing seasons the fans want to see more of what made the first 27 episodes so worth seeing. On the other hand, after three years, the point has come at which a series should visibly develop further, so as not to simply repeat itself at some point. On the other hand, you shouldn't go too far away from the proven concept in order not to scare away the loyal fans. The "Poldark"-makers have taken a good middle course, which makes the new episodes exciting and very stirring.

So the story is consistently developed further. This also applies to the characters, especially Ross Poldark. While at the beginning he was still the hot-headed rebel, he now makes his decisions much more consciously and is also willing to make compromises. George Warleggan, on the other hand, is increasingly dazzled by his hunger for power, which he also carries out on the backs of the inhabitants of Cornwall. This means that the conflict between the families, which encompasses all seasons, can remain exciting and, in some respects, surprising.

As well as Cornwall's once again fascinating landscape, the new locations also ensure that the series is visually given a breath of fresh air. But fans also have to come to terms with a change that won't please everyone, because a main character leaves the series in season 4. This of course makes for a very emotional moment, which will also lead to a certain change in the dynamics between certain characters in the upcoming 5th season. But before it's time, fans in Germany can now enjoy the very successful fourth season at home cinema, which is staged thrillingly, filmed great and played very well. Those who liked the first seasons will love the new episodes. And that's clearly what it's all about: Absolutely worth seeing!

Picture + Sound: The series convinces visually on the Blu-ray with an atmospheric color scheme, a decent image depth and a very good overall sharpness, which let many small details of the great equipment and wonderful landscapes come into their own. As with the previous seasons, the sound is available in a DTS-HD Master Audio 2.0 mix, which primarily transports the dialogues powerfully from the home cinema boxes. But also ambient noises and various sound effects provide an atmospheric sound backdrop. This is absolutely convincing for a current TV production. Gut!

Extras: The fourth season offers the viewers on Disc 2 almost an hour of bonus material. There are quite extensive interviews with actors like Aiden Turner, Ellise Chapell, Heida Reed and others (ca. 41:18 min.). A look behind the scenes (ca. 4 Featurettes, 9:07 min.) illuminates Poldark's way from Cornwall to London, the new locations, costumes, make-up and equipment. The Making of (3 Featurettes, approx. 8:34 min.) focuses on the farewell of a popular character, the themes loss and separation, as well as the journey of Ross Poldark. All in all worth seeing for fans, even if the featurettes could have been a bit more detailed.

Fazit: "Poldark" goes in the fourth season somewhat different ways, if Ross gets into politics and thus to London. This also puts the already fragile relationship between him and Demelza to a hard test, which, however, is only one of the numerous plot strands of the new episodes. Opulently staged, beautifully filmed and played great - even the fourth season of the British success series can fully show its strengths again. The Blu-ray presents the episodes in good picture and sound quality and also has around 1 hour of bonus material on board. This package is very clear: absolutely recommendable!